East of the Mountains

With a sight-glass full of amber, virgin oil I set out from Bariloche. Struggling with intention, I decided for a start to run the only section of the Ruta 40 I had bypassed, opting for a lake ridden route on the way South. Turns out that either fork one takes is equally rewarding. The Eastern fork turned out to be a melodic stretch of soft turns, at first chasing a sizable lake, then dipped into a valley where the road layout was mandated by the adjoining river. Canyon roads are my favorite. I probably put a fifth of the miles on my bike before this trip doing runs up and down the Poudre Canyon West of Fort Collins, Colorado. 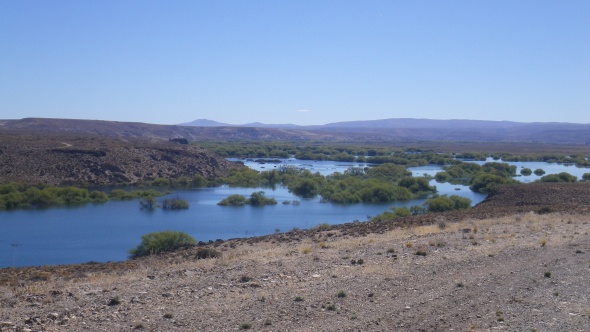 I kept glancing at the map in my tank-bag quickly making calculations, and decided on a route back into Chile skirting an impressive looking volcano on the border. Stopped in the last town before the climb to ask about possible campsites near the border at the tourist information office.

When I pulled up to the market in town to get some provisions, the security guard walked out and gave me the thumbs-up looking at the bike. With an armful of items inside I rounded the last isle to only two cash registers open, stacked full of older women with carts bursting with food. As I placed my bet behind one of the lines, an employee came over and motioned for me to follow him as he opened up a register just for me, saying ‘para la moto’. Like premier parking slots for hybrids at grocery stores, bikers should obviously get their own check out line.

Where the plan comes together

I crossed back into Chile the next morning and followed the road signs according the the most published town, Pucon for a bed and a shower. A small resort town on the edge of a lake in the foreground of another volcano with a main street designed for tourists. I left the next morning ensuring my bearing hugged the Andes, eyeing up the map for the highest pass back into Argentina. I found nearly the last one before a large unsaddled stretch until Santiago-Mendoza which I’d done already, so I decided to stop shuffling about and march East. 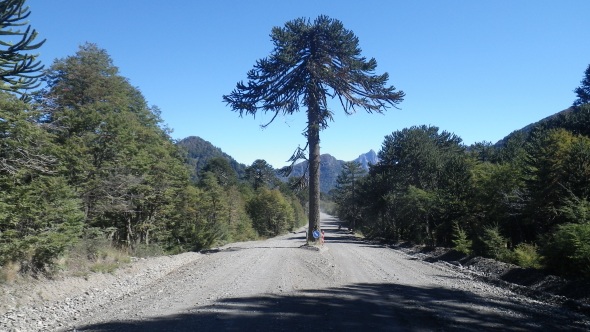 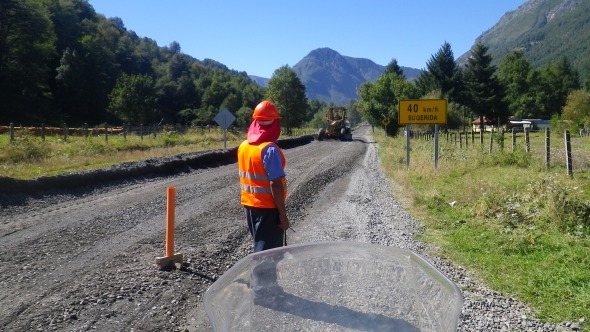 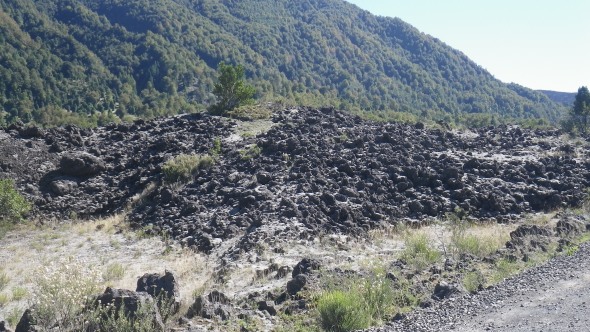 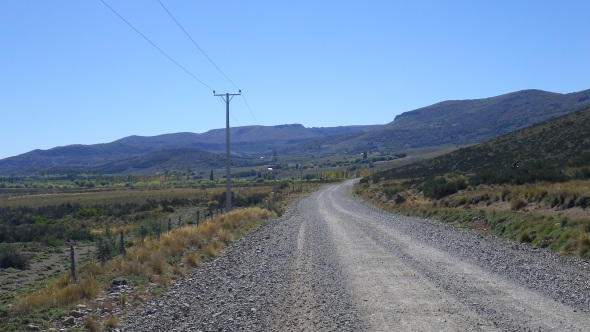 I walked into the border office for Chile to exit for the 5th time and sedately went through the process of clearing myself and the bike from their country. It was all business for them, whereas I took a more sentimental disposition as they left their 10th stamp in my passport. My last memory of riding in Chile came in the form of pleasantly riding with my visor open, then suddenly rear ending the business end of a bee while doing 55 mph. I quickly recalled how the road unfurled as I dug the bees remains out behind my sunglasses with both eyes clamped shut in fear of it’s friends in formation nearby. Good one.

I rolled down the East side of the Andes informally betwixt countries towards the Argentine Customs. With the vestiges of the Andes in my mirrors, I used the barren midlands I had to cross to the Atlantic coast to package and store my thoughts. 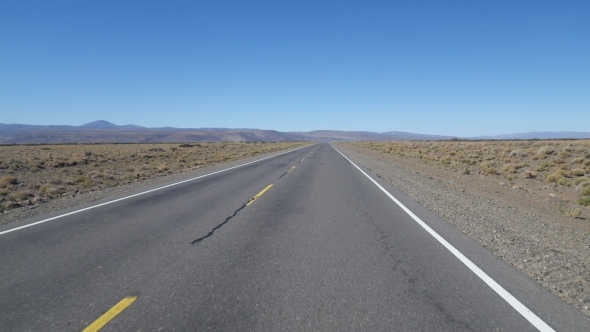 I found a bold artery on the map to efficiently pump me East. I rode until gas presented itself where I would then top off while in anthropomorphic fashion, give the engine a moment to settle.

I chased my shadow until the sun invaded my mirrors, then I began scouting for breaks in the fencing along the highway to throw my tent up. 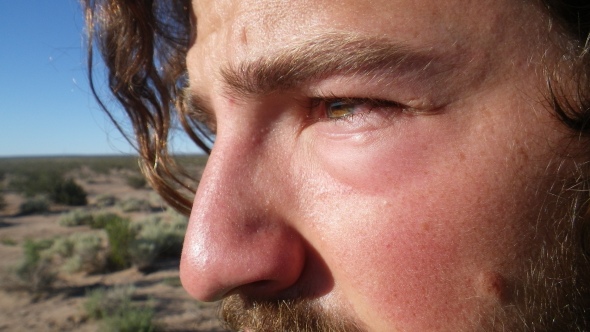 The bee got a good licking in…

Making sure to retrace the previous nights tracks through the sand, I rejoined the monotony of Ruta 22 the next morning and settled into the saddle for a long day, tapping into my podcast reserve. In order to spare you a rant chock full of adjectives synonymous with ‘desolate’ the whole day can be accurately portrayed with one picture. 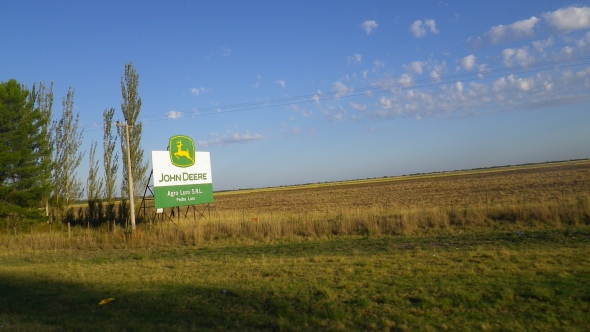 I pressed on to Bahia Blanca, suddenly finding myself back in the tropics I felt I’d left in Columbia. Violently shedding the layers of my riding gear, the first thing that ran through my mind was finding a hostel that did not advertise aqua caliente and basking in the frigid cleansing.

I spent a day re-acclimating to the new climatic conditions and did some work organizing a means back to The States for the big lass and I. The hostel had a cool vibe, and was comfortable to cast in with the eclectic lot.

Buenos Aires was just out of reach for a days ride from Bahia Blanca, so instead I ended up finding a campground on the edges of the cities reach for the night. 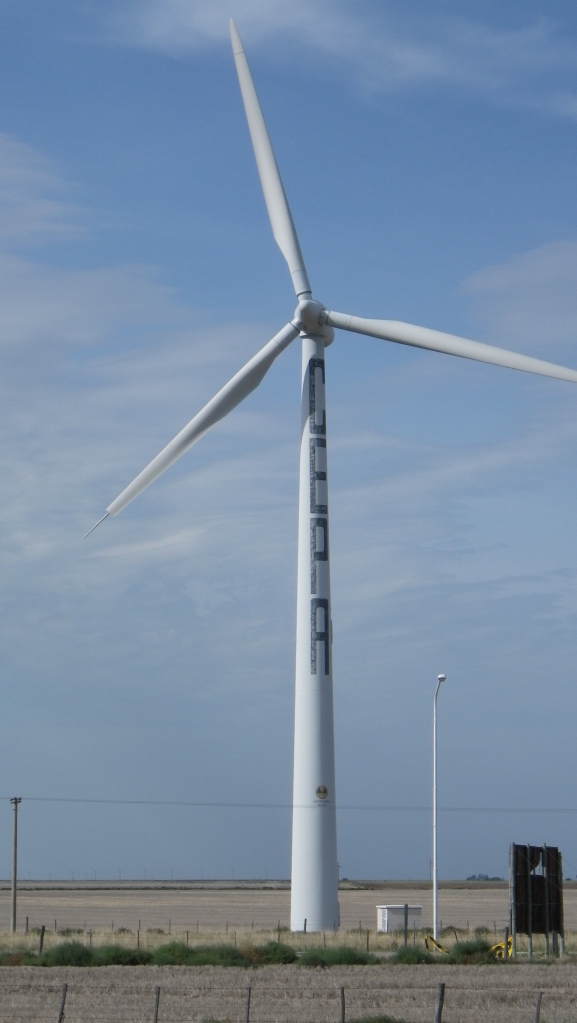 One of three old Bonus machines I passed. All three not functioning… 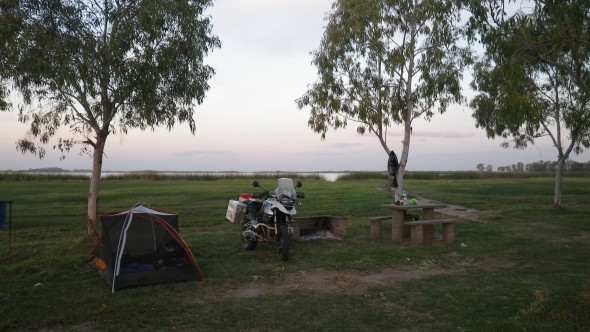 In an effort to offset travel/shipping costs while visiting/leaving Buenos Aires I had figured on visiting Uruguay for the ability to withdraw USD from certain bank’s cash machines, then taking that to the black market in Buenos Aires and getting 50% (at the moment) more for my dollar. Plus, I’d be able to check out a new country. 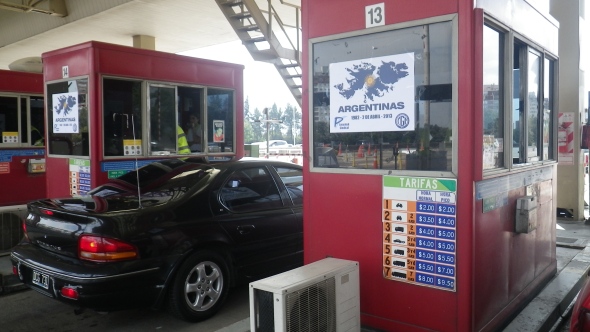 Unfortunately, motos are not free on the toll roads near Buenos Aires 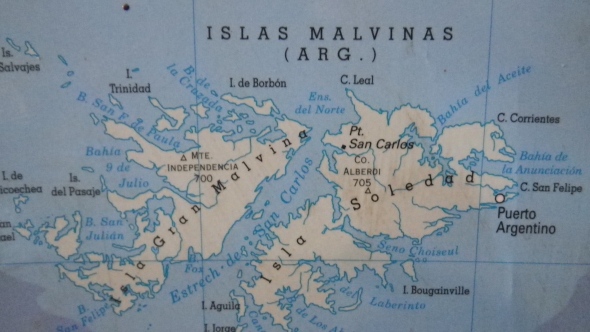 If you look closely at the poster on the toll booth, you’ll find the evidence that some Argentinians are still salty about the Falklands (Malvinas in Spanish). It becomes more prevalent the farther South you go, you’ll see big trucks with flags and decals loudly displayed. Similar to confederate flags in Southern US states.

Inevitably, I got drawn in by Buenos Aires’s gravitational pull of the road network, and ended up having to lane split about 30 miles of traffic to break free eventually making it to the Uruguay border. 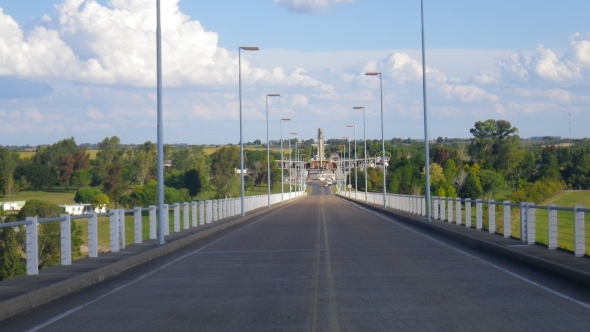 I managed to find a reasonable room in Mercedes, just over the border. First impressions revealed a country not at all dissimilar to Argentina. The next morning I easily found myself entering Montevideo, the country’s capital, before noon in search of a greenback dispensing cash machine. Successful, I continued East along the coast happening upon a hostel in Punta del Este. Because of the Easter holidays there were loads of tourists from Argentina about, and the hostel ended up partaking in a massive asado, Argentine barbecue. 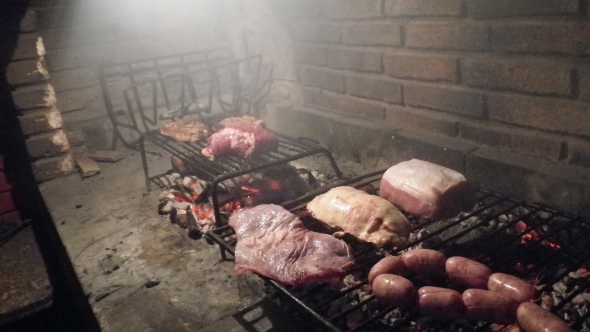 Walking out to the pier after, I unknowingly happened across the Monumento al Ahogado. The other sculpture by Mario Irarrázaba like the larger one in the Atacama in Northern Chile I’d visited before. I prefer the Chilean specimen myself, entirely based on the ability to ride up next to it. 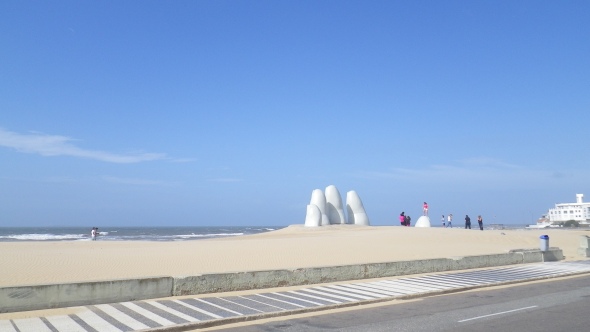 In contradiction to the photo above, a massive storm front was moving in, and so curtailed my ambition of riding up to the Brazilian border and finding a place to camp. Instead, I slipped into the prevailing winds and tried to stay ahead of the rain heading back West into Montevideo for another withdrawal.

I spent just one night in Montevideo, then chased down another USD dispensing machine in the morning before heading back for the border. It was a brief venture into Uruguay, but dampened by weather and a pressing exhaustion of moving so much lured me towards BA where I could hole up in one spot for a couple weeks.

One of the suspension bridges en-route to Buenos Aires

I spent most of the next day in top gear cruising towards Buenos Aires with few stops. Reaching BA, I dropped in on Dakar Motos who are spearheading the shipment of my bike to Chicago. It was late in the day so would take care of the logistics in the morning, but they have a small, spartan housing area for bikers and so decided to stay the night there. Bryce happened to be there coincidentally, as well as a few other bikers. We stereo-typically ended up talking bikes into the wee hours of the night over beers. They didn’t have a proper bed available, so I threw my tent up for the last time in the back yard.

The next morning I finalized the shipping arrangements, and left the bike in their shop while I went and found a bed closer to downtown. I’ll be returning to pick the bike up the morning of the 15th, riding it to the airport for processing, then it should be nestled in the underbelly of some lucky airliner a day or so after bound for Chicago. I’ll then fly back some days after, hopefully arriving with my bike already there, so I can just pull right out of the airport. Sounds easy enough…

I took a brilliant train downtown and found a hostel, making plans to meet up with some fellow riders for drinks that night. It felt somewhat wrong leaving the bike for the simplicity of public transit. But the train had passanger regulated windows allowing me to experience a familiar breeze while risking a bridge truss to the face hanging my head out the window like a dog kept things interesting. 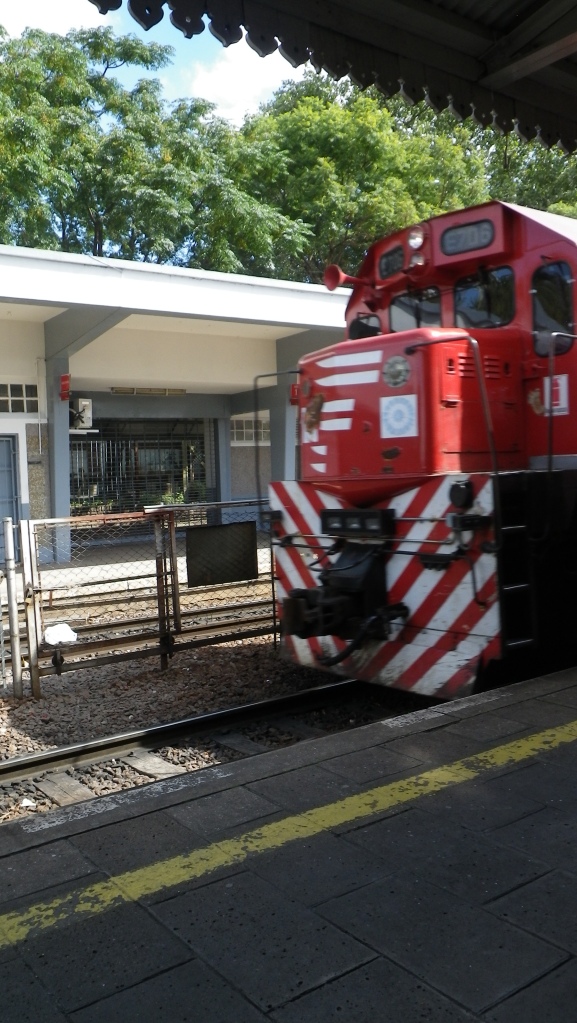 Now I have two weeks to get my fill of this critically acclaimed metropolis. Heralded as the ‘Paris of the Latin America’, I look forward to many curbside coffees, music, museums, food, architecture, and possibly trying a bit of Tango if I can muster the balls. I doubt anyone would be interested in a travel blog without a motorcycle starring in the adventure, but for the uninitiated I’ll try and throw up a report of my findings here before I leave.

It was hard leaving the Andes after having been so intimate with them for months, and everything else pales slightly in comparison now. Based on the latter thought, I believe I’ve recently come to an understanding with the impending return from this journey. On return I will be waking up from a seven month dream. A bliss not many have the opportunity to embark upon, so I count myself an extremely lucky individual. I’ve sown a seed that will flourish in my head no doubt, as I already find myself thinking about Africa, Scandinavia, Russia, Asia…so many roads, so little time.

Thanks for tuning in!

“As the traveler who has once been from home is wiser than he who has never left his own doorstep, so a knowledge of one other culture should sharpen our ability to scrutinize more steadily, to appreciate more lovingly, our own.” – Margaret Mead

2 thoughts on “East of the Mountains”