Buenos Aires has an abundance of energy, easily felt walking the streets at any hour.

One needs time and stamina to get the most from this city. You can choose to see the city during the day, getting all the obligatory photographs at the tourist attractions, see some tango, sampling cafes, read about Eva Perón around every corner, eat loads of meat with a fine glass of wine, then happily go to sleep to perform a variation of that the next day. Which is all grand and good. Inevitably though your normal hours of operation slip towards the nocturnal. Argentinians didn’t invent partying, but they’re hard at work perfecting it. It’s widely accepted that things don’t kick off till closer till 3am here. So you sleep in, use up the remaining daylight in someway. Have a late dinner around 10ish, then at times returning to the hostel for a wee nap around midnight. Shower and ready yourself around 1am, then you can head for the bars and clubs. Typically I prefer to go without dancing of any sort. But, when you’re in a sea of writhing people, infectious electronica blaring, and you see the mobile pole dancing unit roll by you just start throwing shapes without remorse. Plus, everyone looks awesome in strobe lights. You feel simultaneously dirty and triumphant walking outside to daylight…

Here’s a slew of photographs from my time here: 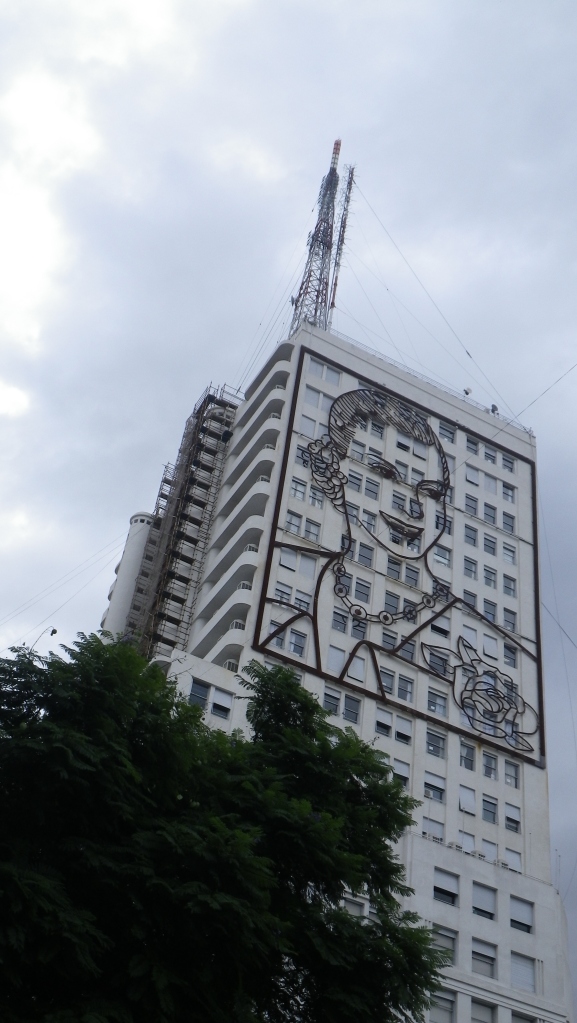 Two sculptures of Evita on the same buliding. Remembered as a stout representative of the bourgeoisie, the Southern facing portrait was meant to aim towards the middle/lower class neighborhoods of Buenos Aires while the Northern aimed towards the upper class areas.

Christina’s (president) office. It was painted with ox blood and lime back in the day giving it the pink hue. 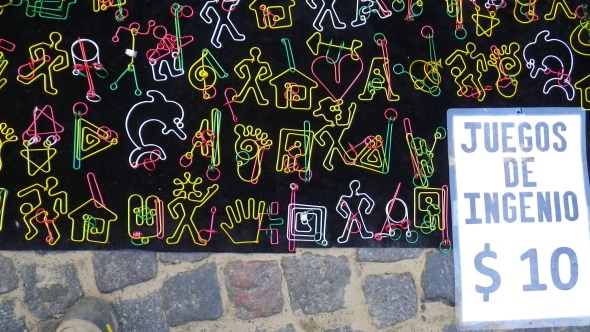 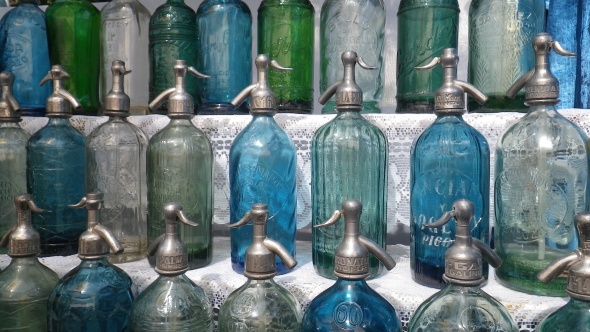 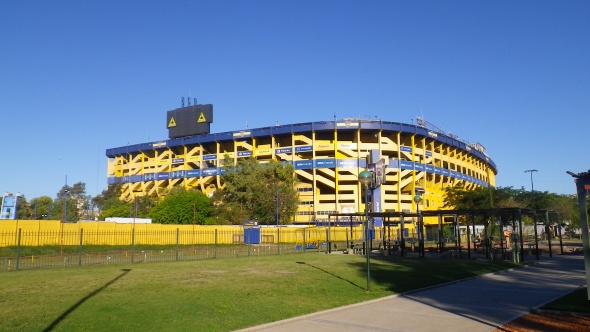 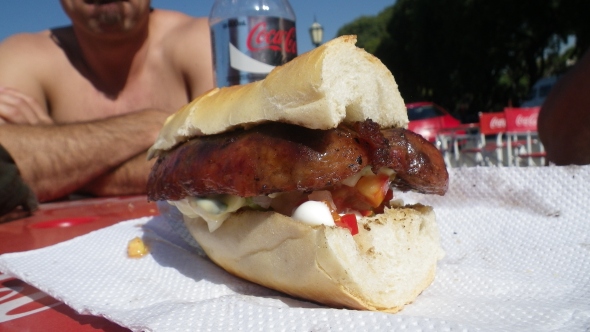 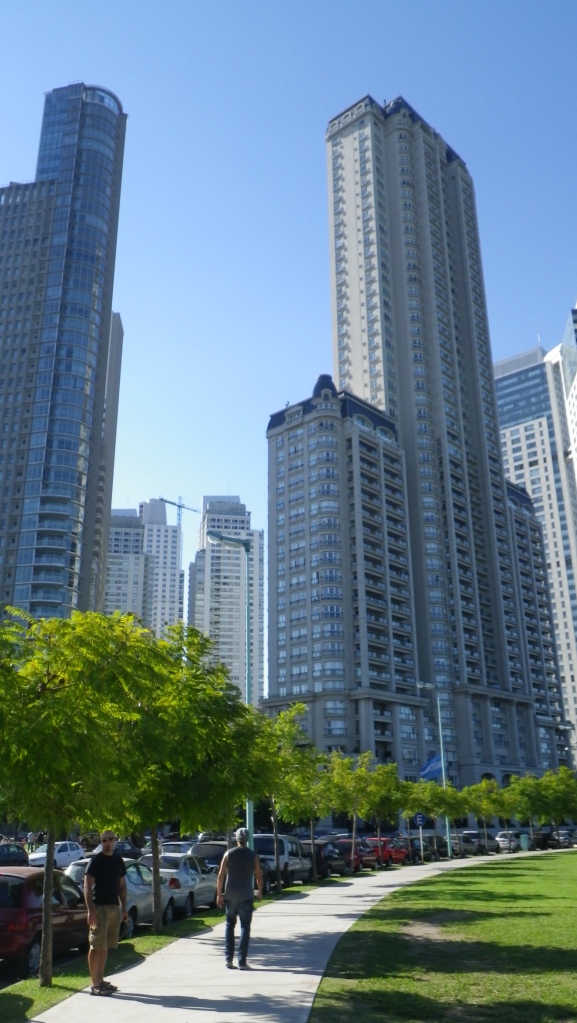 1 of 28 “The Thinker” statues around the world

They converted a beautiful old opera house into a chic bookstore.

The national exchange rate for the USD hovers around 5.1. With a wad of hundred dollar bills in my underpants, I went walking Florida street for a deal. Loads of shady looking people casually say “cambio, dollares, dollares” as you walk by. I bounced around to a few buyers finding a good rate and settled with one fellow for 8.3. I followed him to his office, where he opened the door to a shop with boarded up windows and a sign saying it was available for rent. We exchanged bills and I made sure to check each for any signs of forgery.

I used some reward points and booked myself a swanky room downtown for a couple nights. A welcome respite from hostel life. 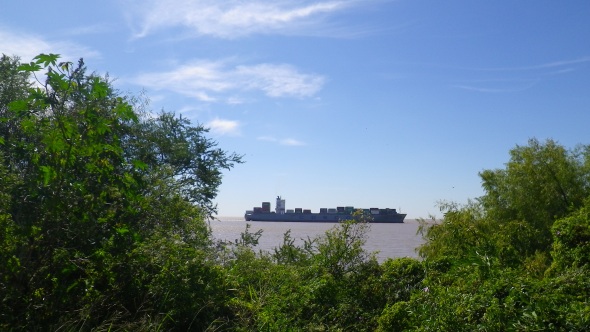 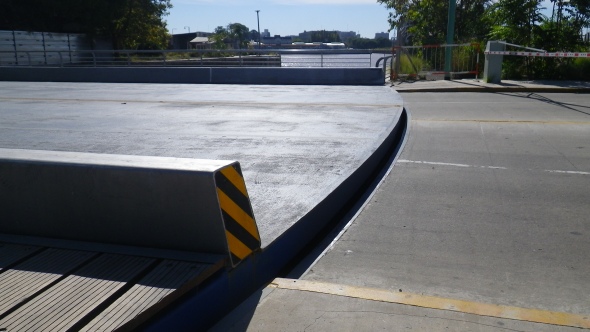 Occupying 14 acres in the Recoleta neighborhood La Recoleta Cemetery was converted from a church’s garden in 1822. It’s laid out like city blocks, a main tree lined avenue with walkways branching off. I really knew nothing of its heritage or splendor before I waltzed in, and was subsequently blown away. It’s tough to describe what it is to walk through there, a very special place to say the least. Each and every mausoleum was a wonder to behold. 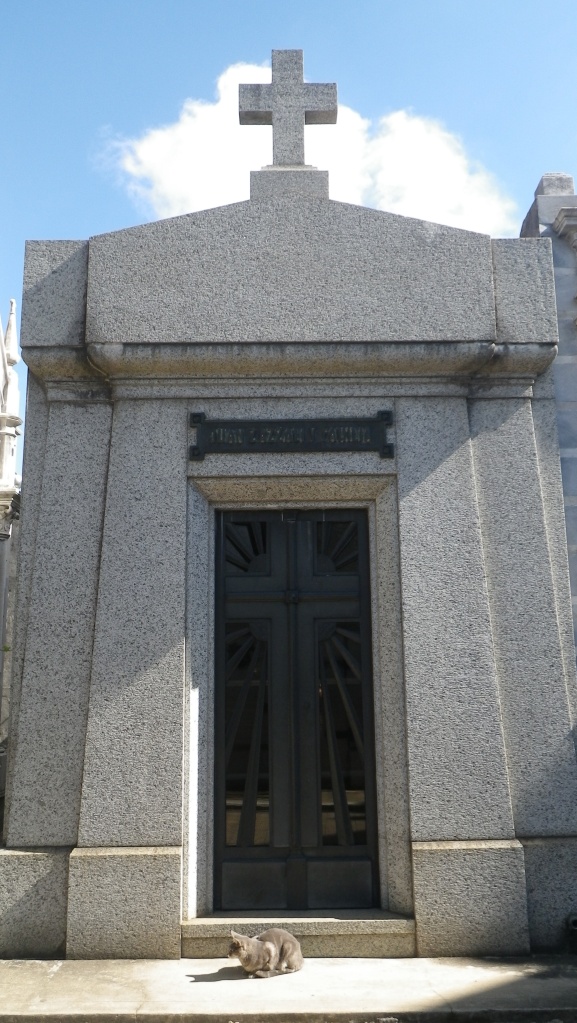 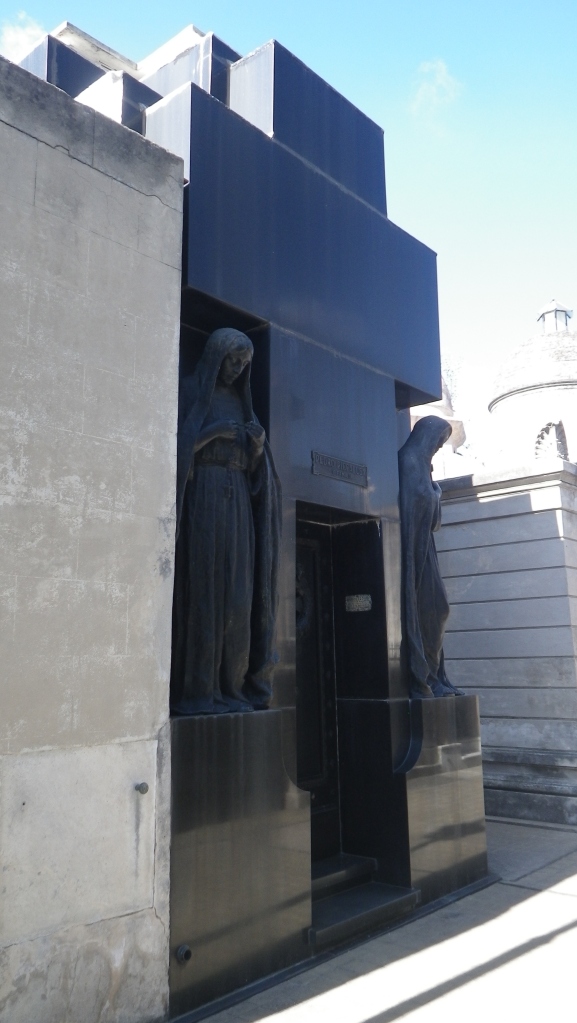 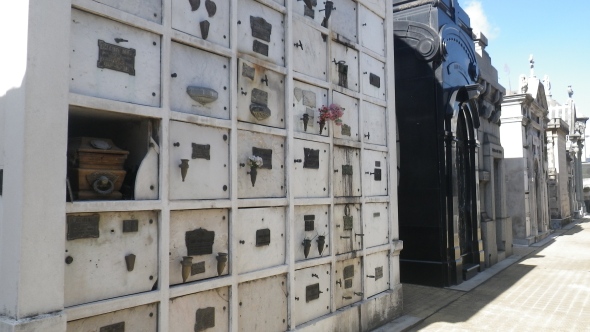 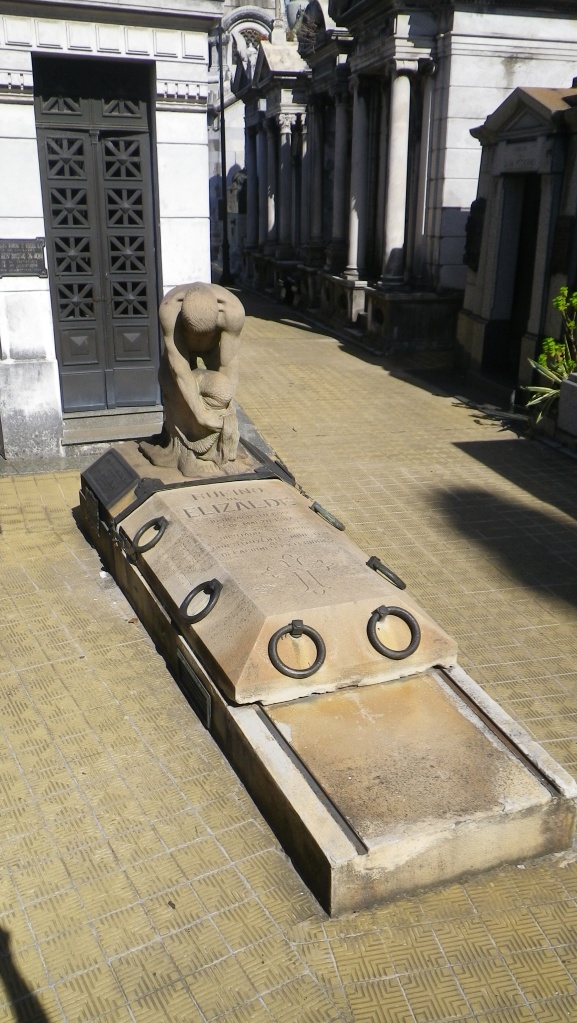 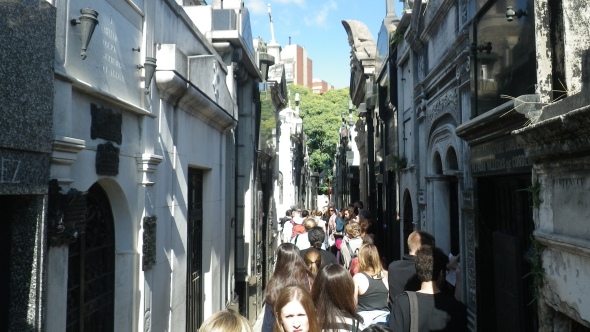 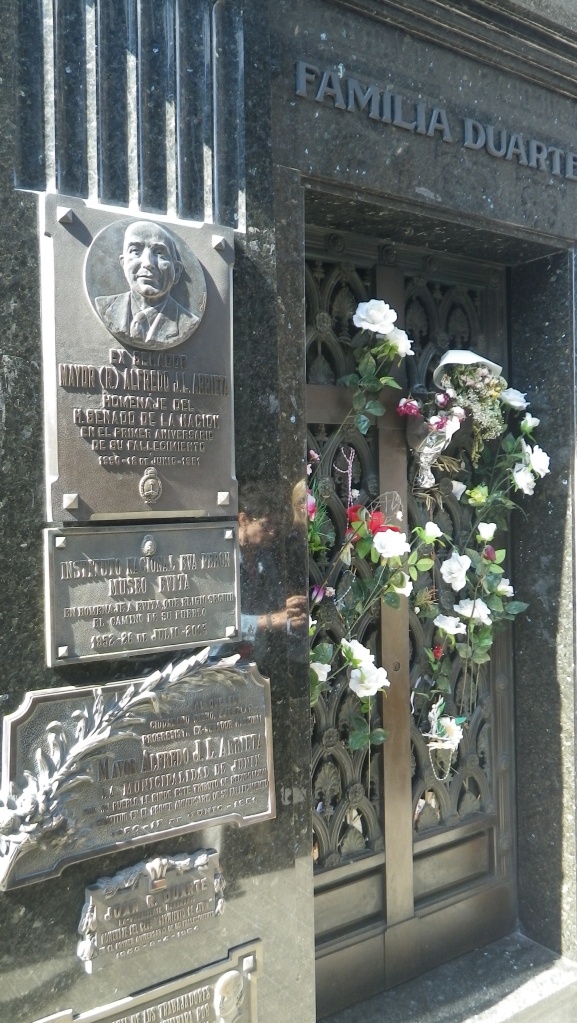 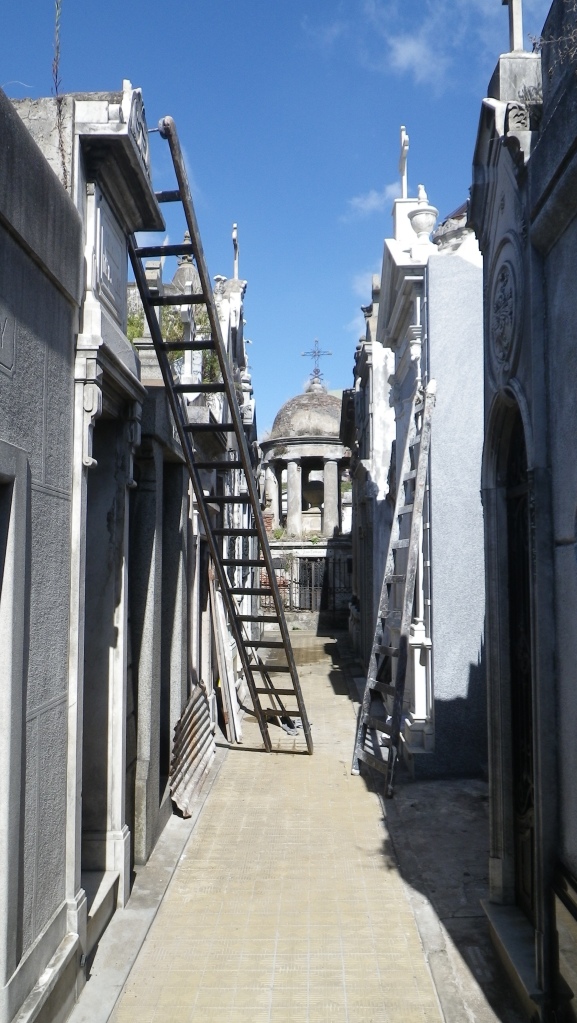 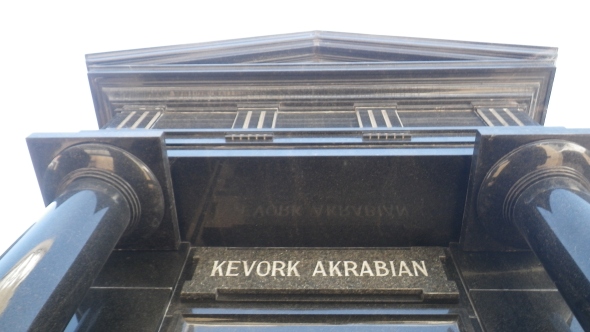 I easily spent two hours quietly walking about. Afterwards I picked up a couple empanadas and went to a nearby park.

Avenida 9 de Julio (9th of July Avenue, Argentina’s independence day) is the widest avenue in the world, occupying an entire city block. At a normal gait you can’t walk across it entirely on one set of green lights. 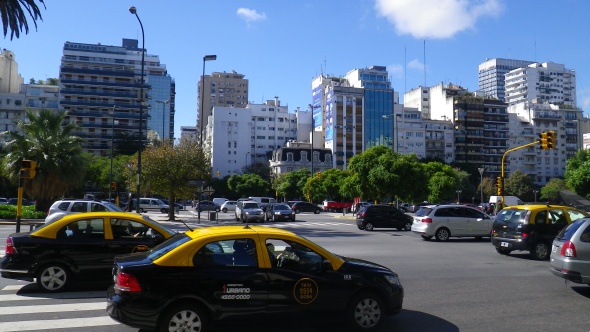 Monday the 15th I took the train back out to Dakar Motos and packed the bike up for the final time and rode it to the airport for its flight. I spent my last 18 miles riding in South America lane splitting a major highway full of traffic. They checked my fuel level, I disconnected the battery, took a few extremities off to reduce volume, let some air out of the tires, and sat back as they anchored her to the pallet. 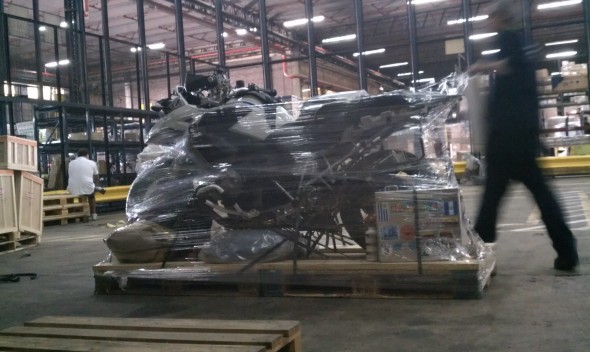 Officially, I wasn’t allowed to pack any personal effects or camping equipment with the bike. But the folks helping me package it up didn’t seem to bothered about it all, so I threw nearly everything in there with it. The price was solely volume based, weight didn’t affect it at all.

Slightly crestfallen I returned to the city with just a backpack replaying some fond memories in my head. I was able to get my mind off of it by meeting up with Bear & Kevin, fellow riders from the West coast. We went to drum show that Kevin had highly recommended. la Bomba de Tiempo is group of highly skilled percussionists that pulls a healthy crowd every Monday night. They have a conductor, any member of the group, who stands in front and orchestrates by using a selection of 70+ hand signals to create some mad beats. None of it is rehearsed, the conductor could get a base line going, then build on it. Every few songs, the conductor would go back to an instrument, and someone else would have a crack. It was one of the best shows I’ve ever seen. Every member of the group seemed to be enjoying it as much as we all were. 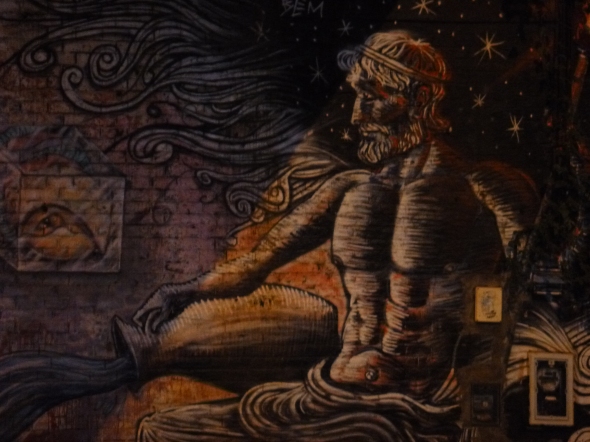 So now it’s Friday morning, a shuttle is to pick me up in a few hours and haul me off to the airport. I am truly excited about seeing family & friends. But, any solace I’d known in the past few weeks about the return have ebbed away ever so slightly. It’s a bittersweet consummation. Time to start planning the next one?

I better get on with my morning before I brashly decide to make a run for it, so I’ll go chase down one last empanada and a coffee. I plan on doing a wee wrap-up post once I return with some of the highlights, low-points, and other assorted data. As always, thanks for tuning in and coming along for the ride with me. I’ll see y’all on the other side!

“What you’ve done becomes the judge of what you’re going to do – especially in other people’s minds. When you’re traveling, you are what you are right there and then. People don’t have your past to hold against you. No yesterdays on the road.” – William Least Heat Moon

Epilogue »
« East of the Mountains

2 thoughts on “Buenos Aires & The End”