Land of Lincoln to Land of Fire

I bolted straight out of my tent right into my riding gear the morning of my planned crossing to Tierra del Fuego. The culmination of years of rumination was nigh, mixed emotions coursed through me as mounted my bike.

I filled up with gas, downed a coffee at the gas station, and set South on the Ruta 3 towards the first border with Chile. The ever present Westerlies tormented me in any bearing I took except East. Even with ear plugs, the wind howls across every surface of my helmet as I strain my head to stay straight. It’s a constant struggle, until you’re fortunate enough to come across a turn when everything grows surprisingly still. You can hear the bustle of the engine beneath you quite clearly as you slip into the winds embrace, easily matching it’s pace near 60 miles an hour. I can open my helmets visor, and find not a trace of a breeze on my face. It’s incredible. You find yourself living for these few precious moments when doing battle with the wind. Muy Ventoso. 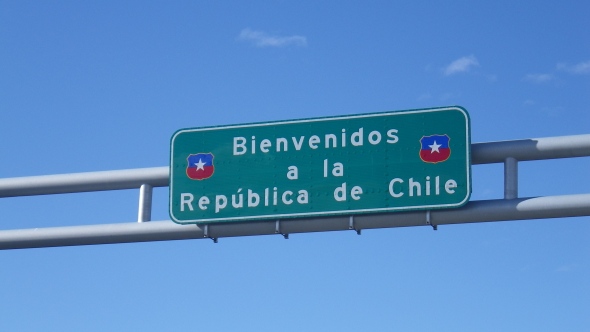 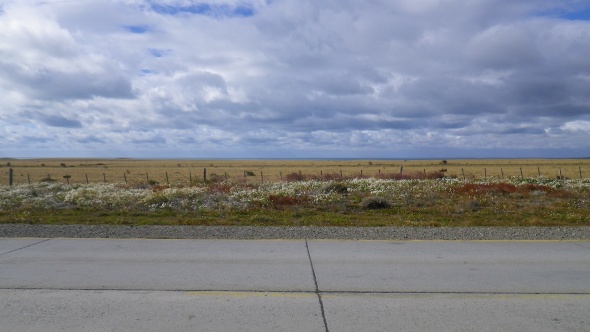 I dispatched the first border crossing quickly knowing both countries routines by now. Back into Chile, I saw my first road sign advertising Tierra del Fuego as I cruised towards the port and my ferry to the promised land. Soon after I pulled up to the Straits if Magellan positioning the bike pensively at the ramp. I could see a stretch of land not far off under a menacing sky. 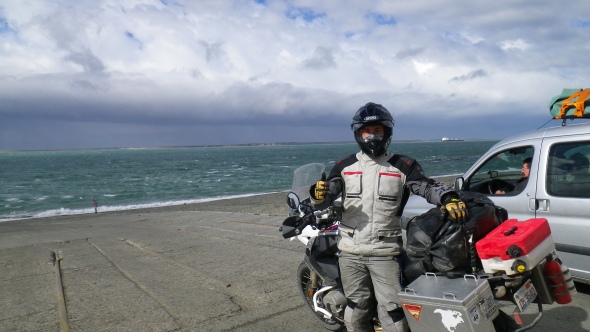 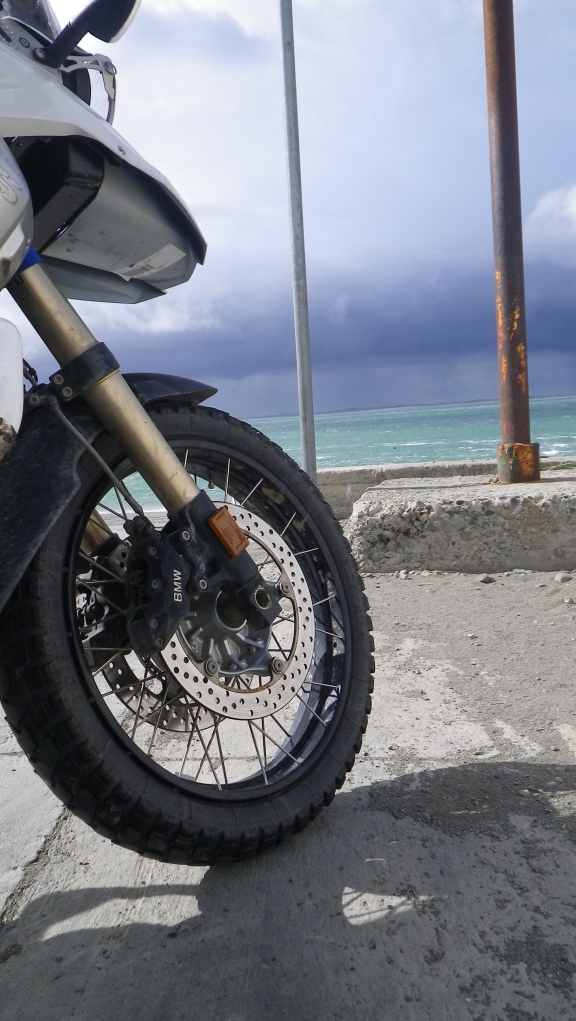 The ‘Patagonia‘ cruised in far upwind of the ramp and let the wind bring her into position as stern thrusters kept her poised amid the conditions.

I was beside myself suddenly getting quite emotional, it was all very powerful with the wind, lashing rain, dark sky, and the swiftly swelling straits straight ahead of me. Orchestrated in my dreams for ages, with a sense of déjà vu I was waved on board at long last. I dismounted and sought the passenger waiting area. I opened the door to a long, narrow corridor lined with packed benches either side with people seemingly staring straight at me. I stupidly gave them a thumbs up. They kept staring, I was shifting uncomfortably until I realized there was a television on the wall beside me…good one.

Rolling off the boat onto the world’s 23rd largest island, I clicked through the gears feeling aloof, artificial. I’ll be damned if I wasn’t riding on Tierra del Fuego.

I proudly waved at nearly every vehicle that passed, like ‘hey buddy, we’re in Tierra del Fuego!’. Sometimes they waved back, and I felt like I was part of a sweet club. Pressing further inland I made a quick stop in Cerro Sombrero for fuel. The next bit was unpaved all the way up to the second border, back into Argentina. 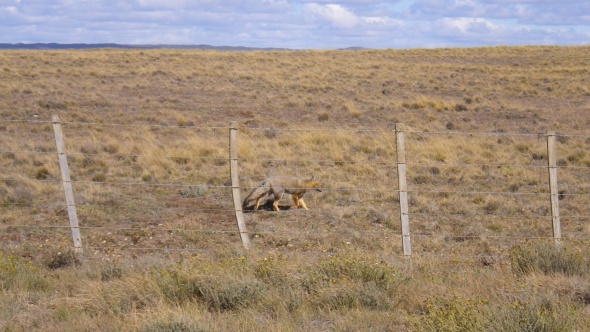 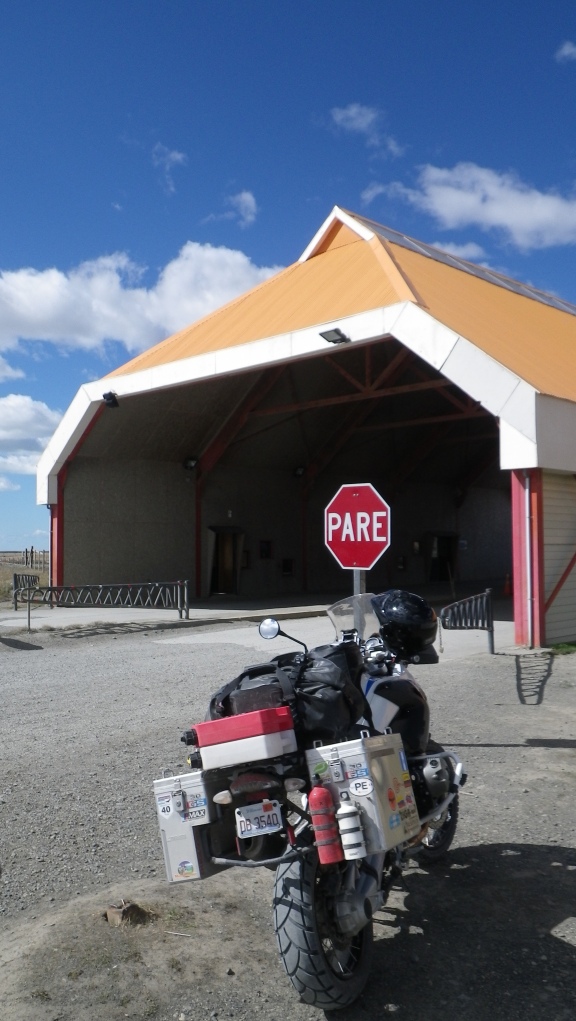 Back into Argentina and onto the Ruta 3. In an effort to delay the end of the road (world), I stayed a night in Rio Grande. I pleasantly ran into Alex & Andrea (couple traveling two up from Romania), and they knew about a ‘word-of-mouth’ unmarked hostel for the night. The owner is a bike enthusiast, and has ample knowledge of all the roads and routes on Tierra del Fuego. We spent the evening regaling our travels since I hadn’t seen them since the Stahlratte.

Most houses in Argentina have a grill like this in the kitchen. Awesome.

After learning the typical weather conditions in Ushuaia, I opted for a late start the next morning. The wind took a favorable aim for the South-East, fortunately the same direction the Ruta 3 took along the South Atlantic coast. It didn’t take too long for me to notice the first flora growing higher than a foot in what seemed like ages. 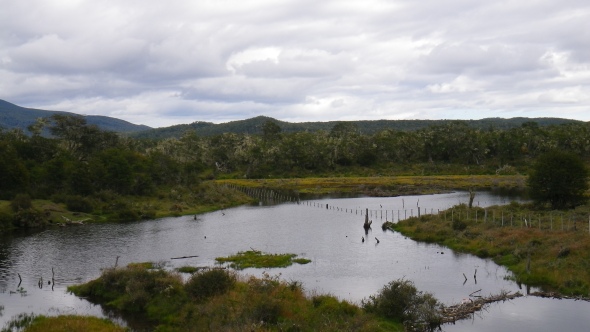 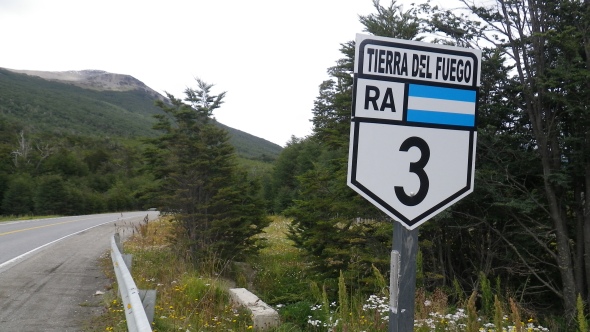 One of the species of conifer down here is the Southernmost in the world, tough bugger. They’ve actually extracted trees from the coldest regions here on TDF to transplant in other places that typically don’t allow for trees with the temperature and constant winds. Need to hunt down a Calafate berry in the woods (or, maybe in some gelato in town) sometime as it’s been said that whomever consumes the berry is guaranteed a return to Patagonia. I like the sound of that.

I wasn’t expecting such a brilliant ride into Ushuaia. Tree cover was proliferating, and parts of the Darwin mountain range popping up on the horizon. It was a nice way to cap off my Southern journey. 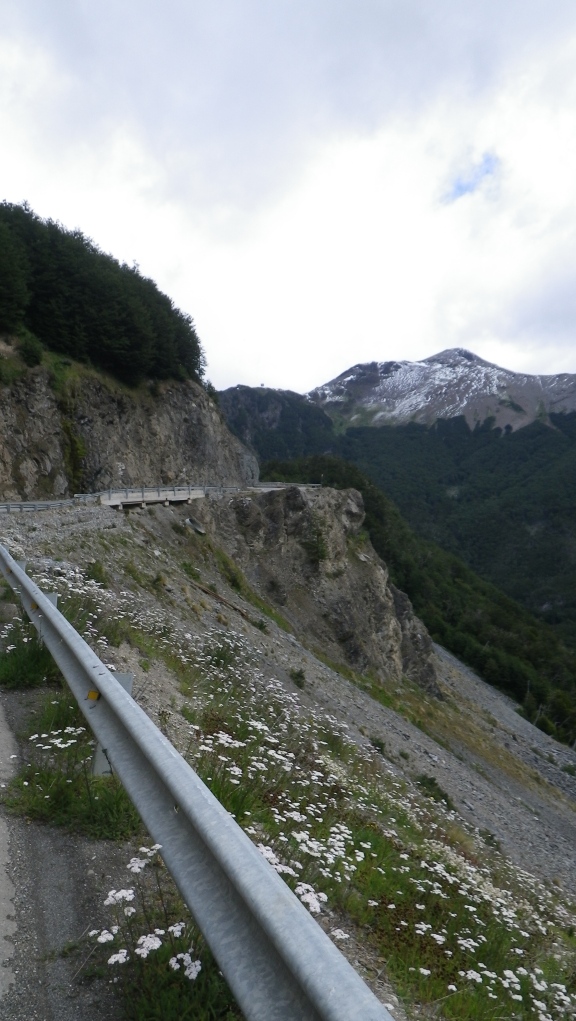 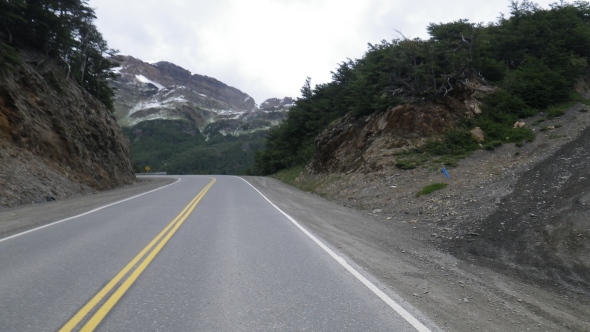 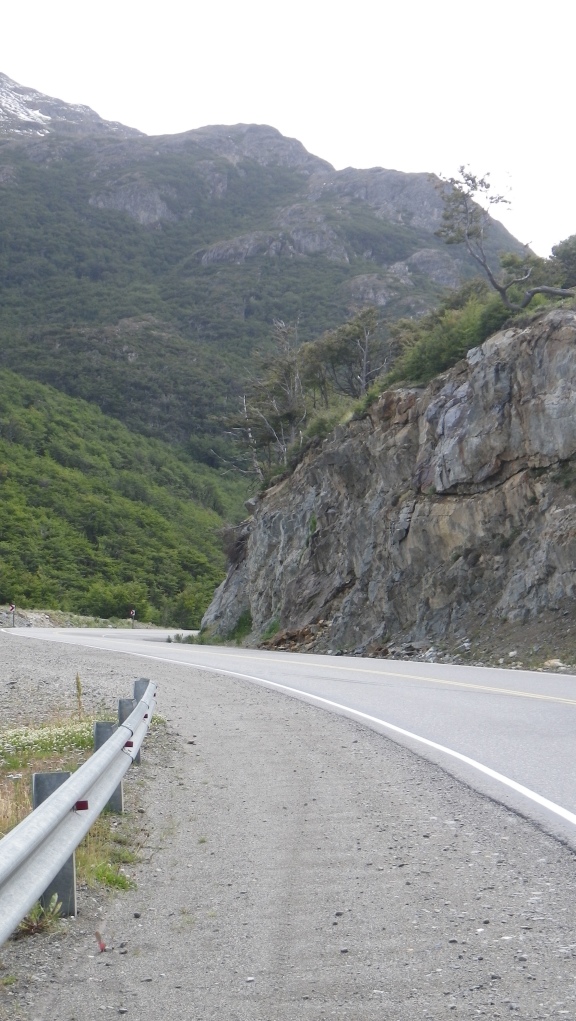 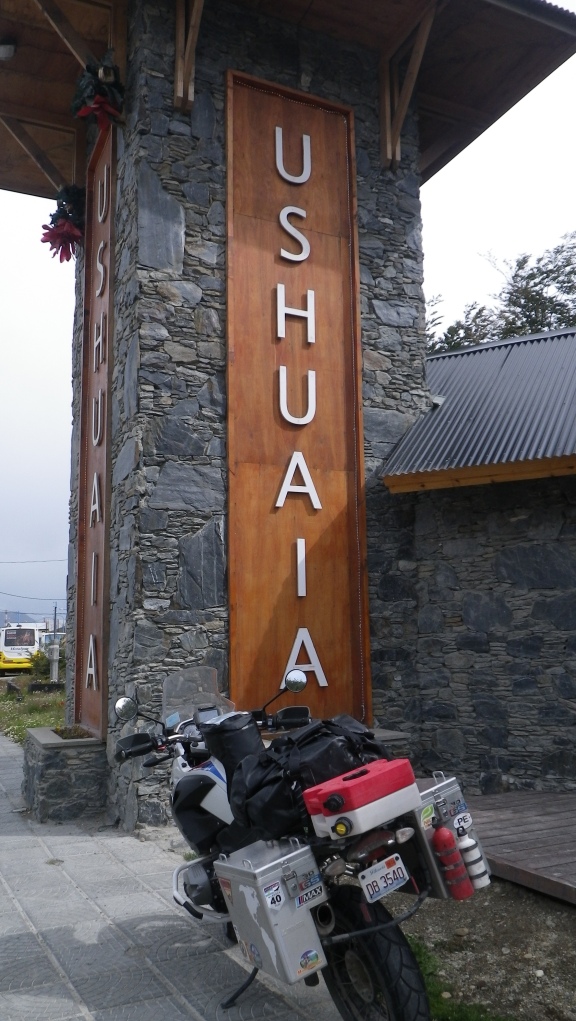 I rolled into Ushuaia, motoring up and down it’s steep streets checking out the mountains to the North and the Beagle channel to the South. I found some reasonable accommodation and went for a walk around town. I was only 590 miles away from a chunk of Antarctica. 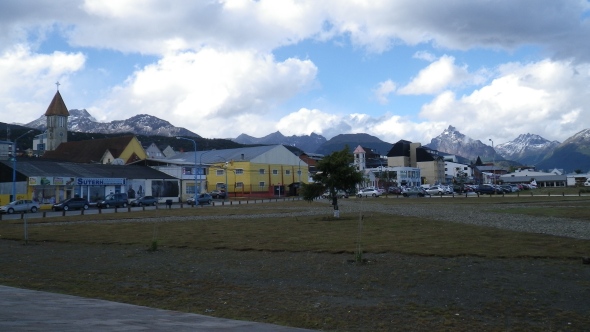 I unabashedly spent my entire first day doing absolutely nothing. Potentially feeling the five months of bustle I’ve been subject too. I woke up late, had some breakfast then crawled back into the bed for a bit. I roused myself enough to read only few pages in my book, then settled into the world wide web to see what was on tap with Netflix. And that was how I spent my first day at the end of the world, it felt grand.

The next I figured on getting up in the mountains cradling the city. 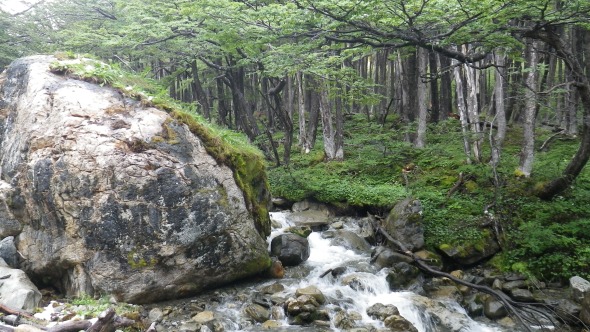 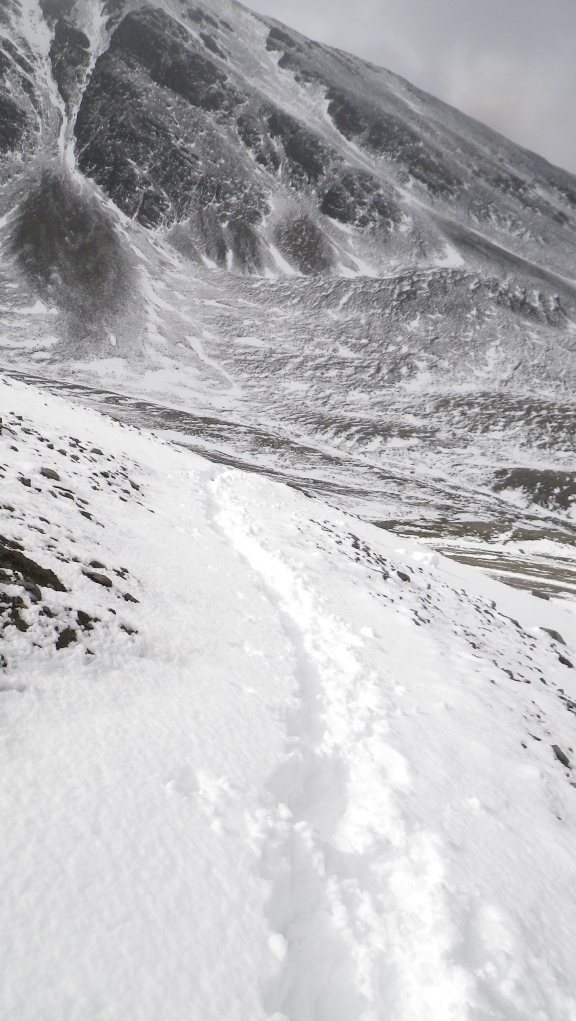 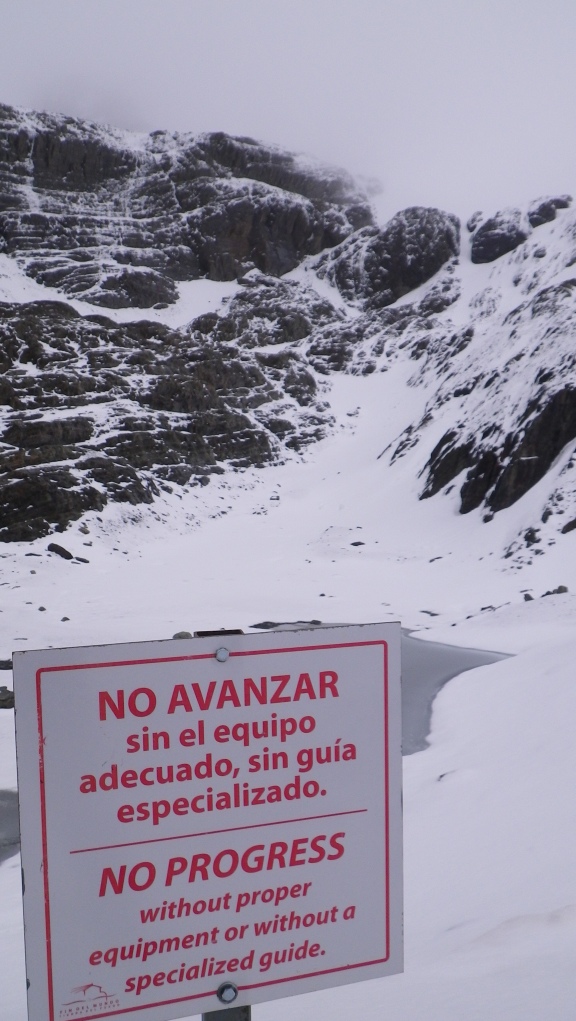 One of the best parts of the hike was the fact that I didn’t have to pack any water. The small stream sourced from the glacier above provided delicious, clean water in abundance.

Hiked up, took the chair lift down for a bit

Yet another day at the end of the world found me riding into the national park for the famous sign and to look around for a bit.

Been carrying this little reward for too long…

I rode in with Bryce (Oregon) who had gotten to town the night before, and we pulled up next to the sign waiting for the obnoxious throng of tourists to disperse so we could grab the photo. We became unintentional celebrities as hundreds of people poured off tour buses from a recently docked cruise ship and were fascinated with our bikes & stories. We must have been photographed scores of times as congratulations flew from ever direction. 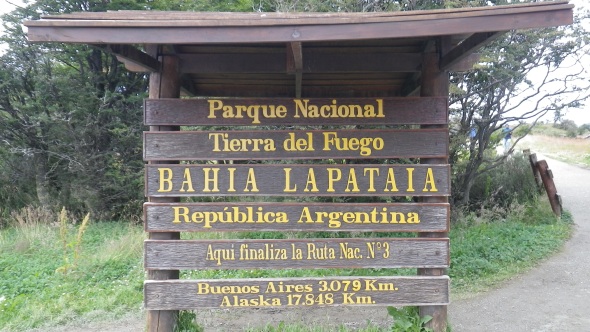 Happily ran into Franki & Tony again back in town, and I could just see the joy in both their smiles, I imagine it went both ways. As is tradition, I followed Tony around the super market prepping for a feast soon after.

A couple days later and it was time to keep rolling. I wanted to take the other ferry from Porvenir on the West coast off the island and land near Punta Arenas. With pangs of sadness I left Ushuaia cruising towards Rio Grande for some gasoline and supplies. I had planned on camping near the water my last night on Tierra del Fuego before catching the ferry the next day.

Pulling into the station I noticed a familiar sight from long ago in the trip, amazingly the couple from Quebec were in the queue in front of me! I had run into them crossing from La Paz, Baja to the mainland of Mexico. It was a long ferry then, and I had a brilliant trip passing the time with them, plus they were gracious enough to offer me the spare bed in their cabin. They’re on a beloved 1976 Honda Goldwing, the first generation 1,000cc flat four. It’s a beautiful machine and it suites them perfectly. We rode to Porvenir together and solidified our ‘ferry buddies for life‘ bond en-route to Punta Arenas the next day. It was amazing to think back on how much had happened since we’d split. And such opportune timing, feeling a wee bit blue all morning, it was a fortuitous encounter. 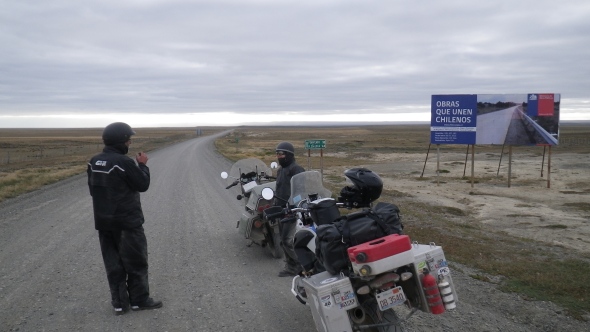 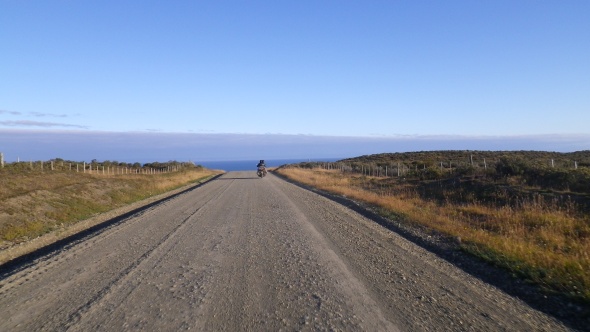 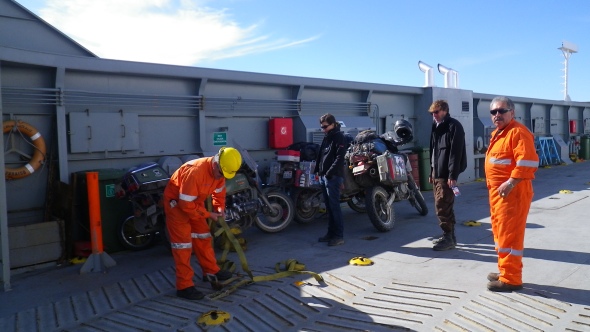 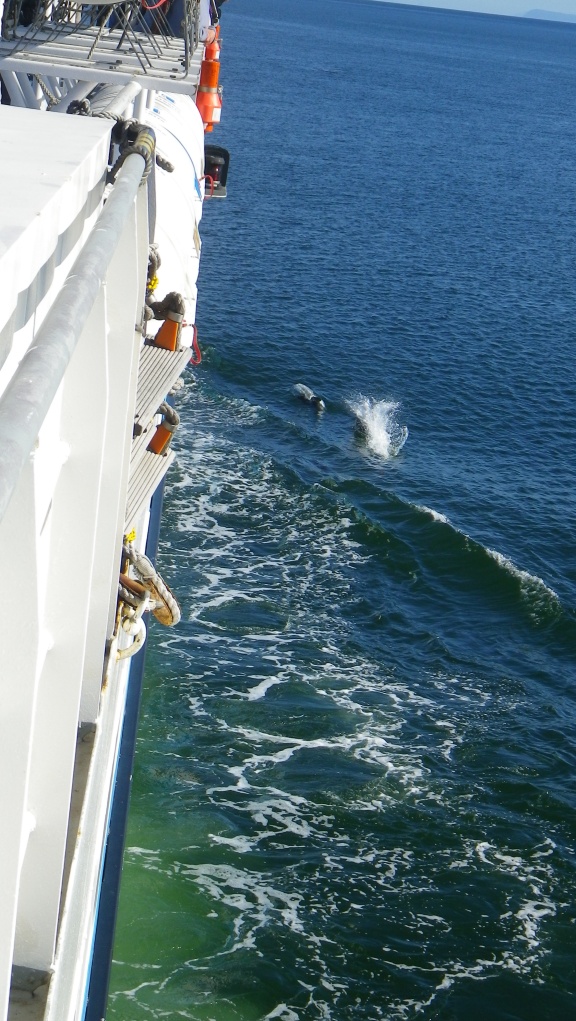 Some dolphins came and escorted us out of the bay

I had arranged for a new front tire and air filter in Punta Arenas. Spent the next couple days exploring the town, and visiting with Erve and Martine. 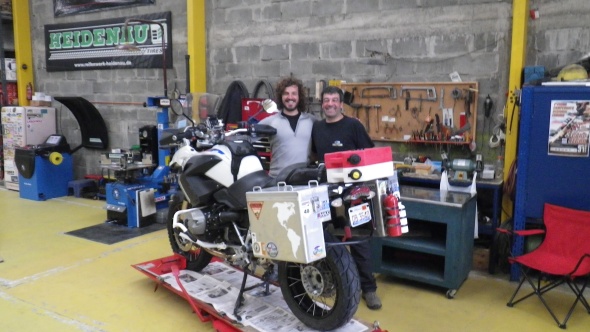 Alejandro, great mechanic where I got my new front tire in Punta Arenas

Looking forward to my own garage someday…

Getting stoked about Torres del Paine which is just around the corner. There may be some time before the next post, as I plan on getting out in the park for a week or so hiking, scrambling, exploring, and otherwise basking in the glory of probably the most beautiful place on earth. 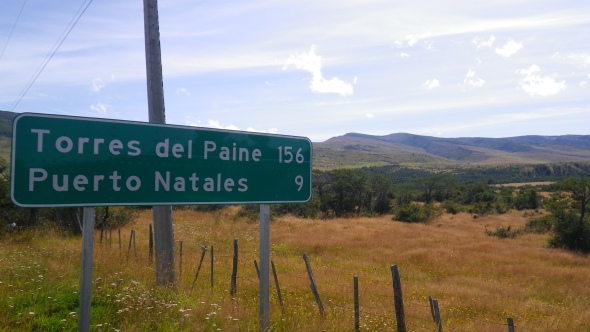 I think back more than five months ago, giving my bike a loving pat as she fired up for the first time for this trip: Pulling out past the familiar round barn farm feeling pent-up and excited. My only fear was always how I’d feel after this adventure, re-acclimating as it were. This was somewhat of a pinnacle of this trip, but there are many more miles to ride and adventures to be had before I’m ready to return home. It’s ‘This Vagrant Braam’s life’, stay with me.

“Adventure is a path. Real adventure – self-determined, self-motivated, often risky – forces you to have firsthand encounters with the world. The world the way it is, not the way you imagine it. Your body will collide with the earth and you will bear witness. In this way you will be compelled to grapple with the limitless kindness and bottomless cruelty of humankind – and perhaps realize that you yourself are capable of both. This will change you. Nothing will ever again be black-and-white.” – Mark Jenkins