I spent the last five days with the family in an ideal bamboo laden house steps from the beach near Corcavado National Park in Costa Rica. With a fridge stocked with food & libations augmented with fresh coconuts brought up from the beach, we settled into a comfortable routine of relaxing near the beach, kayaking the bay, and watching monkeys. Pretty sweet.

View from the house 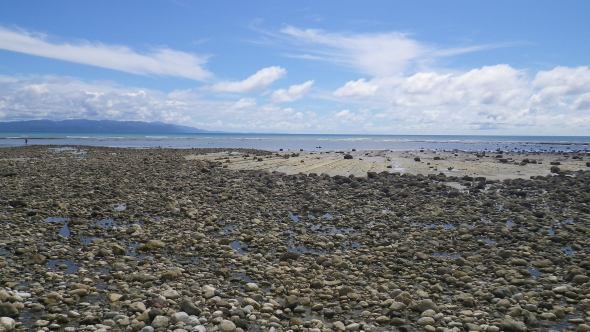 Up close with a White-Faced Capuchin 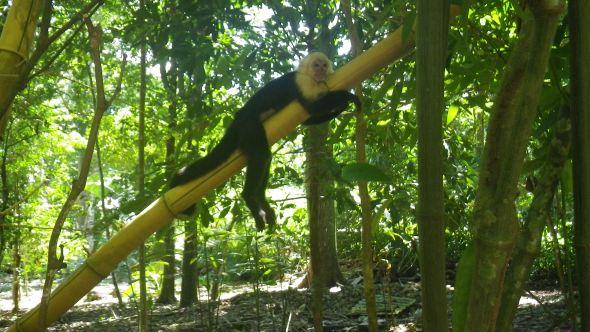 I liked his style 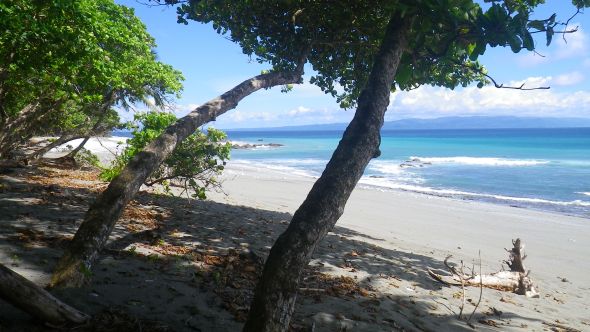 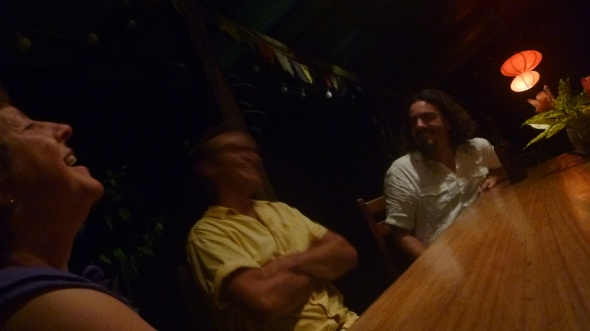 I had to be at the dock in Panama on the 7th to load the bike, so I had to scoot early on the 5th to ensure I had the time to make it across the border into Panama and get across the country. Slightly bummed after having the whole family together since it doesn’t happen too often, but bolstered by their excitement, and what laid ahead I rode off after grabbing a great shot of them…and my bike of course. 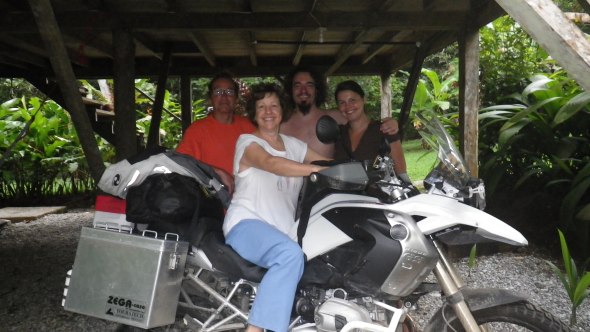 The Panama border wasn’t too much trouble, just a lot of running around for stamps and signatures. Once cleared, I threw the bike in top gear in order to make up the roughly 425 miles to Panama City. Panama police have radar guns, and they know how to hide. Luckily, most of the police checking your speed are on motorcycles themselves, so after I shrug my shoulders and act oblivious they put the ticket book away and start asking me about the bike. I only got caught twice, and besides the one asking me for my riding gloves in exchange for letting me go (I didn’t give in), I made good time and rolled into Panama City just after sunset. That was the longest day of riding I’ve had by far since motoring across the Midwest, but I wasn’t missing much along the Pan American in Western Panama.

I hadn’t intended on making into Panama City so soon, but I gladly used the extra day to check out the Canal and get things in order before the sailing. 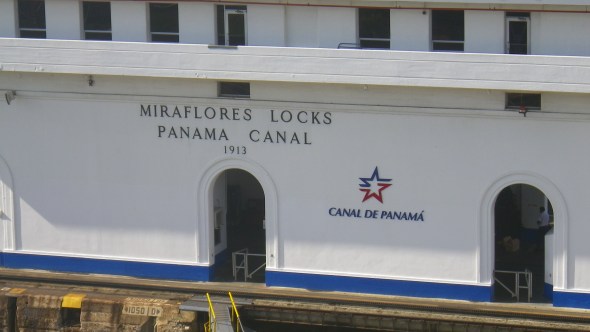 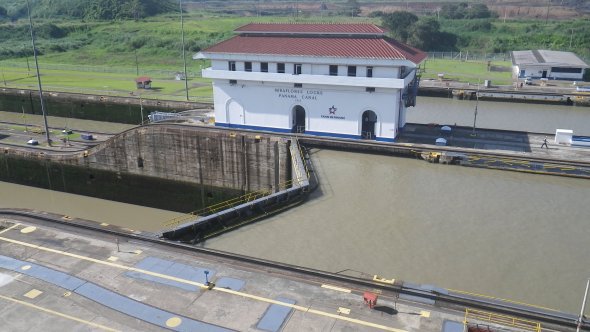 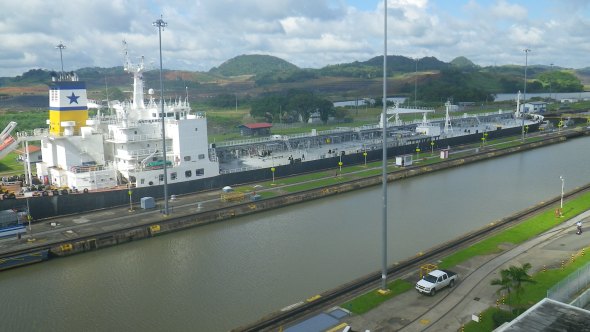 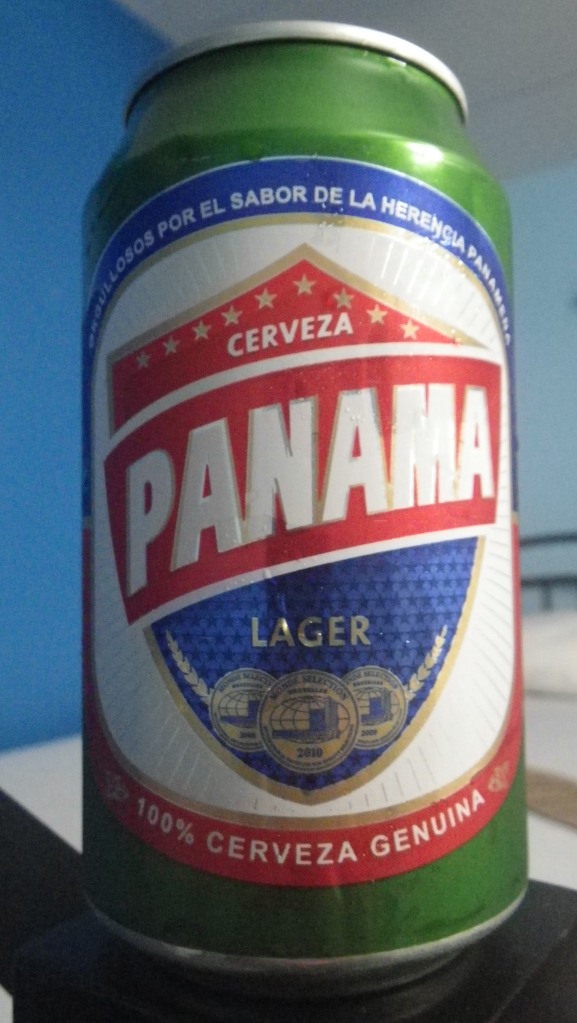 Met back up with Paul and a couple other riders at a hostel in downtown Panama City the night before we rode to the docks. Panama City is a bustling metropolis, heavily lined with sky scrapers, chock full of American fast food joints, and high-end retail outlets. Pulling up to the docks, we ended up finding out there would be a total of 13 bikes on this particular sailing. Sweet. 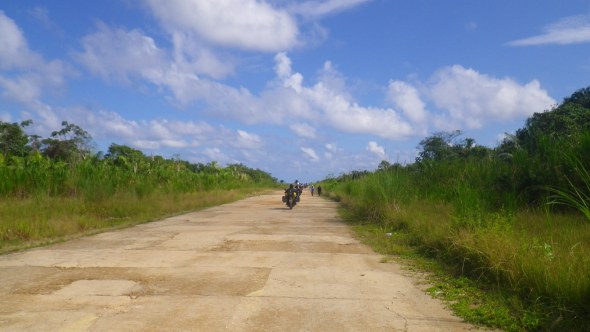 En Route to board the Stahlratte 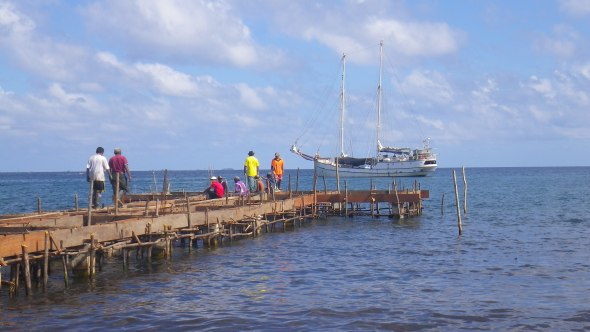 First view of the boat 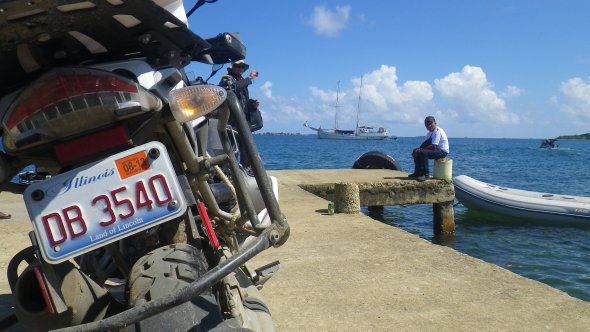 The boat motored in close to the dock in order to start hoisting the bikes on board. Generally a nerve racking experience seeing your steed hoisted over salt water, but add to that grossly improper rigging and the magnificent groaning made by the old battered pulleys, and I nearly wet myself.

The big lass gets airborne

Before we even reached the docks, we were stopped at a checkpoint, and had to pay a fee to enter the Kuna Yala lands. An Indigenous folk occupying a great deal of coast and the 365 islands that make up San Blas. Similar to Indian reservations in the US, but the Kuna seem to have free reign to do what they please with their land & government. In addition to the farming they do on the mainland, and some fishing, their business was tourism. You couldn’t pull a lobster or pick a coconut without paying for it. The plan on the page was to spend two nights frequenting some of the Kuna Yala (San Blas) Islands before sailing outright to Cartagena, Columbia. We spent the first night on a local inhabited island that one of the local helpers lived on, and he had accommodations for everyone (hammocks). It was a pleasant shock walking around the small island after having spent the night in Panama City. Even though it was apparent after a while that some of the locals grew weary of having small boatloads of gringos come to their home pointing and taking pictures. The best I could do was separate from the group when I could and step softly. The water was typical tropical Caribbean, but you wouldn’t dare go for a swim. There would be better opportunities anyway. 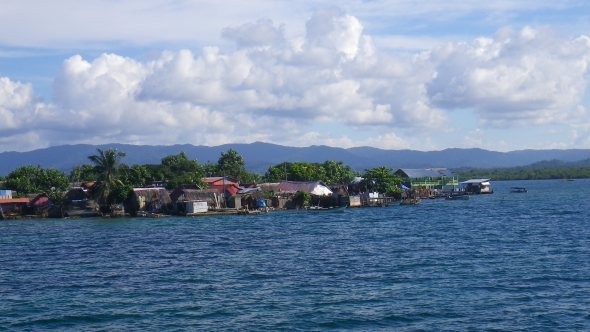 Strangely enough, I still aimed for the hole…

Stocking up for the sailing, as one should when in the Caribbean

Next day we motored to another island nearby to play in the water and nearby beach.

View from the crow’s nest 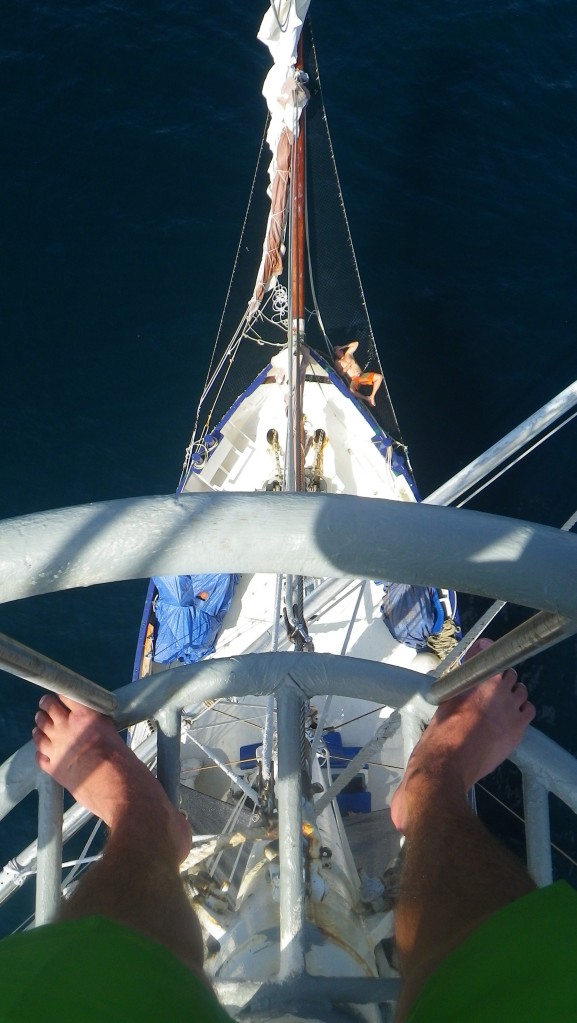 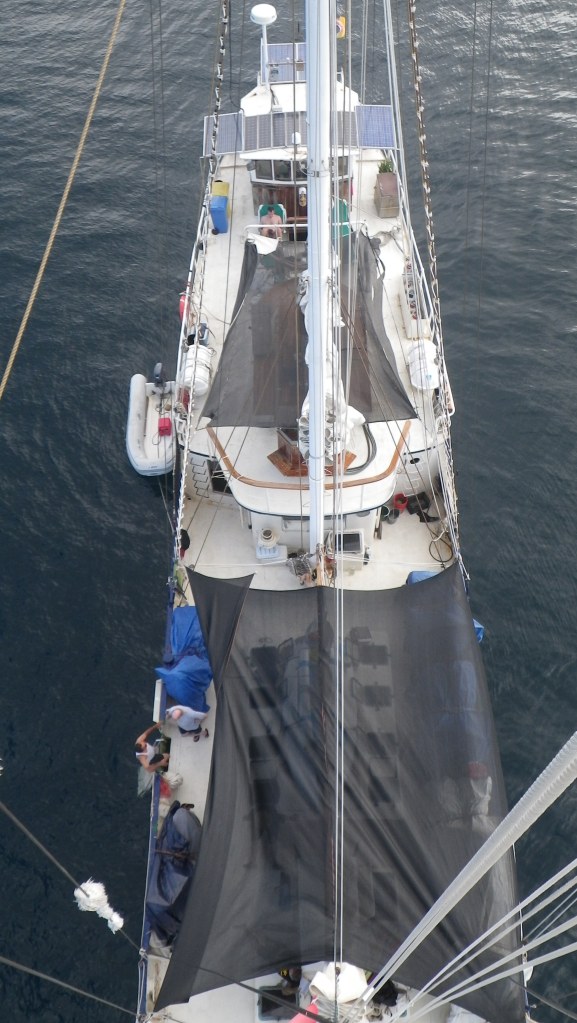 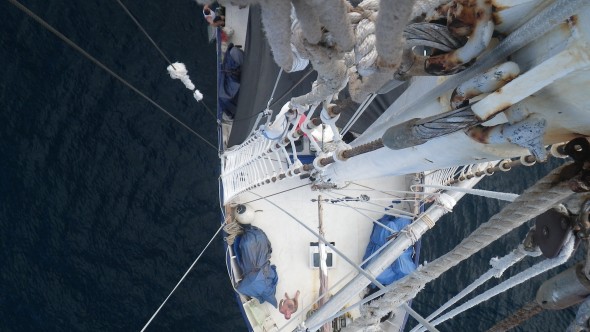 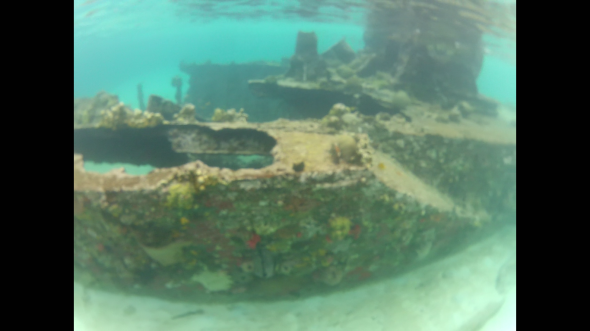 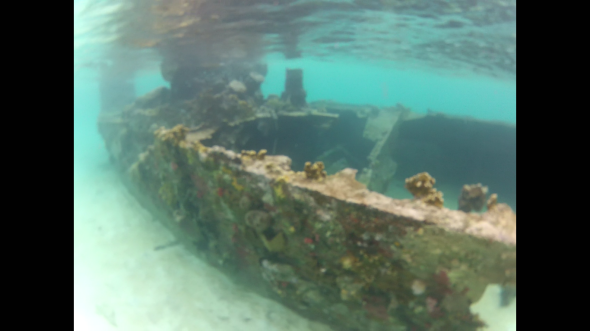 Being a German run boat, I foolishly let me mind wander when I asked to see the engine room, hoping to see Johann “The Ghost” from the movie Das Boot listening and oiling the rocker arms as the enormous engine chugged along. He wasn’t there, but it was cool seeing the relatively small marine diesel engine (100 liter, four cylinder) turning at a cool, but powerful 277 rpm.

Rough seas and poor wind met us, so we battened the hatches and motored to Cartagena. Then the engine started to get warm, too warm. They were forced to shut it down and wait for it to cool completely before performing a minor repair that was needed to keep on. Part of the problem from running a salt water cooled engine hot is that at a certain temperature, the salt begins to crystallize inside the circulation system forming blockages, then it’s a slippery slope from there. For the passengers, the problem with being dead in the water in rough seas is that the waves will broadside the boat and you enter a nauseating rhythm of swaying side to side. All we could do was find something solid to lay against and dream about flying the bikes next time. With enough Dramamine to put down a small dog, I made it through without feeding the fishes. Once the engine was repaired, we kept on to Cartagena without pause. 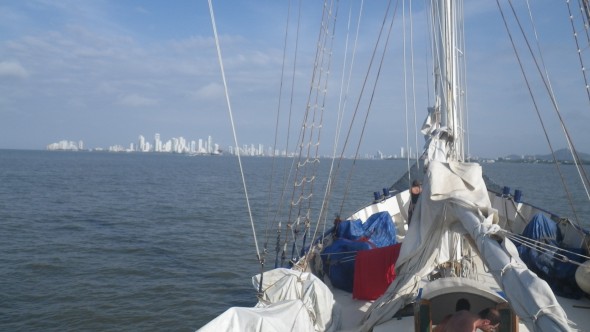 We dropped anchor in Cartagena on the 12th around 11am. We grabbed enough gear for a night on land and they ferried us via the dingy to shore, where we all grabbed taxis to the immigration building. It was too late to try and unload the bikes that night, so we headed into town and all ended up at the same hostel. Next morning at six we went back to the port and brought our bikes ashore. Sounds simple right? We hoisted the bike off the deck (over deep salt water again), into a DINGY, then you “ride” it to a dock, where they’ve hired some muscle to yank it out of the dingy onto dry land. Then you ride it illegally to the Customs Office to import it.

Strange seeing the US coast guard in port 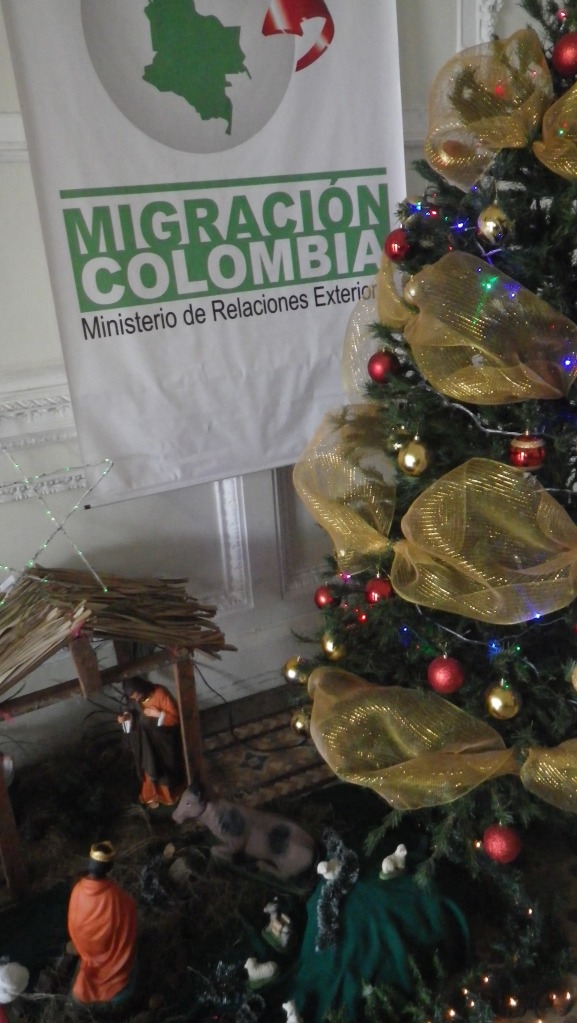 Waiting for the dingy to pick us up

My turn…In the seemingly years it took to get to the dock, I imagined the boat capsizing and me frantically trying to cover both the air intake and exhaust in a valiant effort to prevent any salt water getting into the engine. 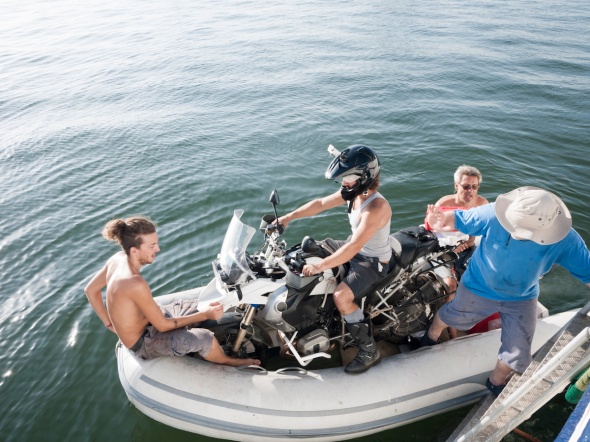 Underpants burned and new ones adorned, I rode to the customs office to the similar dance of waiting for stamps and signatures. Once the bike was cleared the first thing on the docket was to give her a good scrubbing. Even covered on the boat, she had a invasive coating of salt. 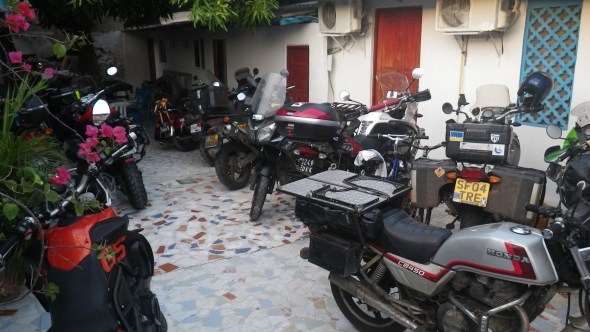 After such an eventful week, a day off to explore and recharge was needed. I couldn’t have asked for a better city to do it in than Cartagena. A Beautiful city, full of history and alive with happy folk. 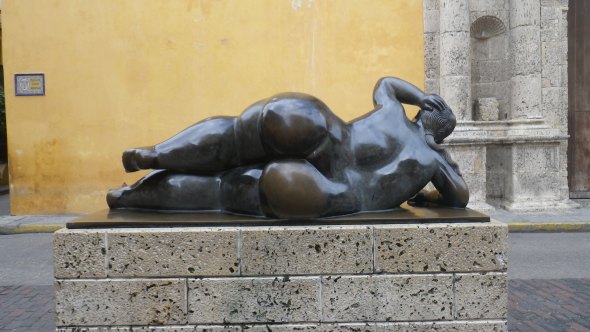 Based on the sheen of her ass, I figured it was local custom to give it a rub 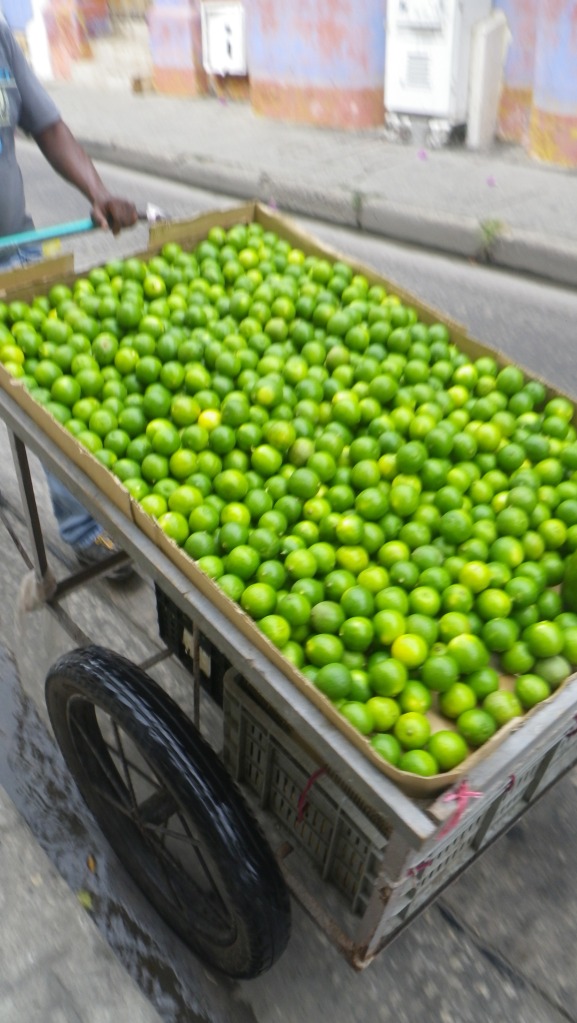 Good to see some small microbrews floating around South America 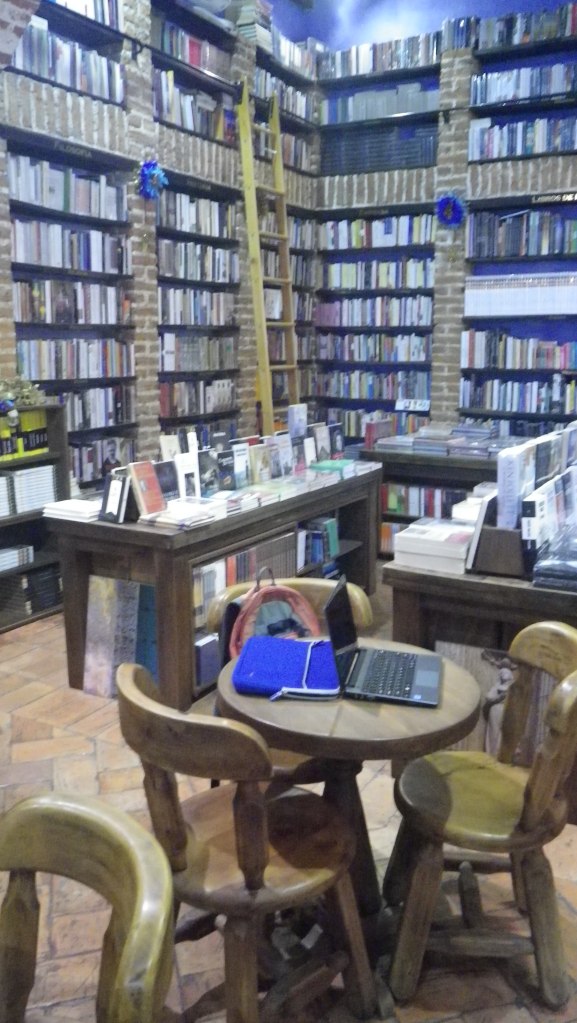 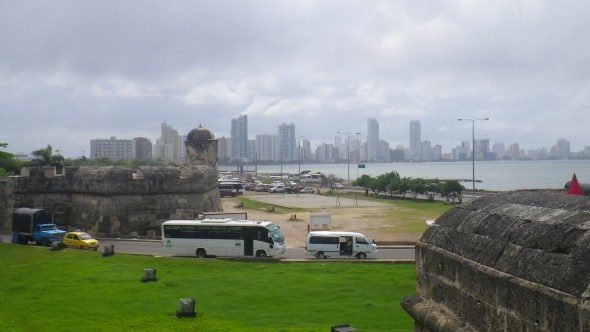 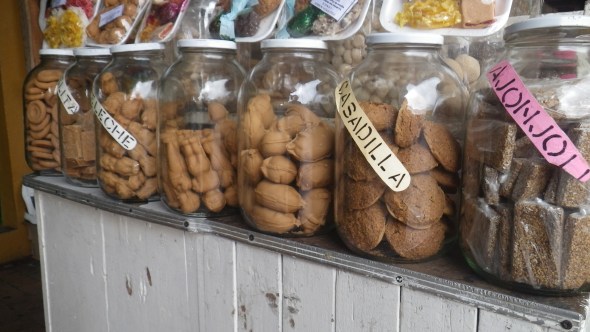 Next up is Venezuela  A vast assortment of landscapes coupled with incredibly cheap fuel promises a great time. Thanks for tuning in.

“The use of traveling is to regulate imagination by reality, and instead of thinking how things may be, to see them as they are.” – Samuel Johnson

A dip into Venezuela »
« Back to it