Halfway through the Tropics

Leaving Medellin the morning of the 27th, I found myself strangely heading North for a few miles in order to check out an odd monolith I’d heard about. 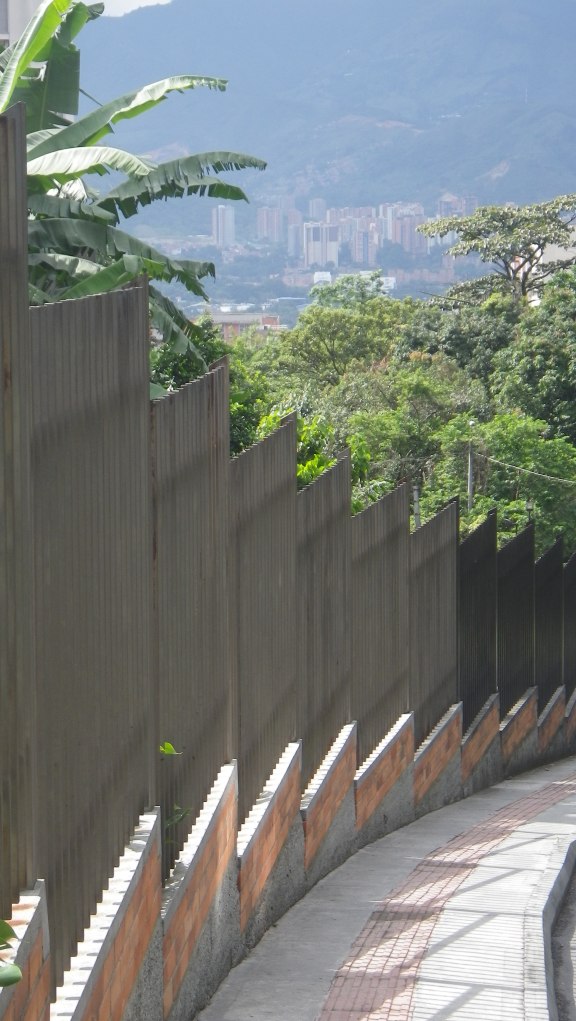 Peñol de Guatapé is a granite dome nicely placed among a scattered group of lakes. Monumentally standing out among its surroundings, once you round the Southern end it appears to have been stitched together from two separate chunks. 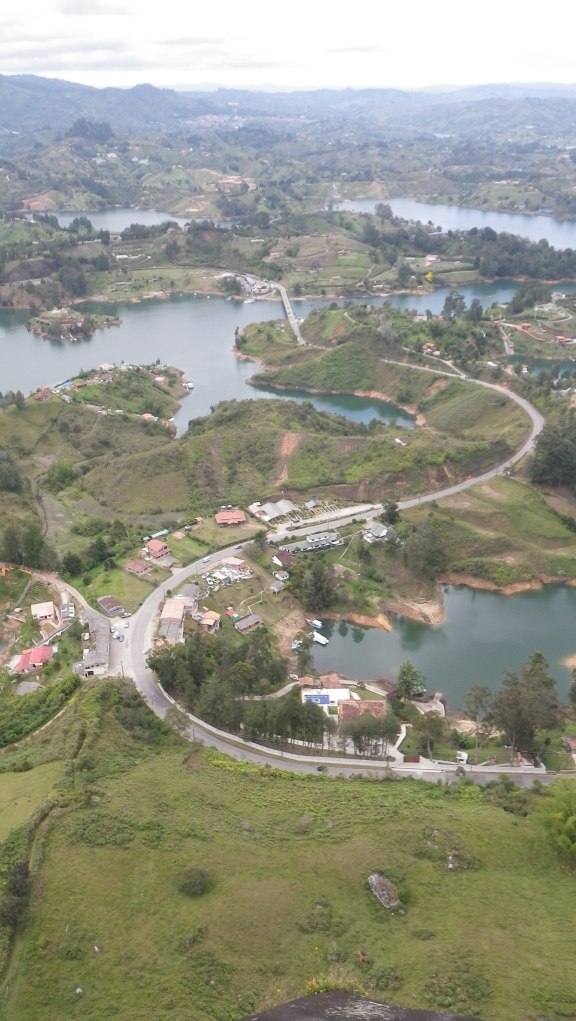 View from the top

View from the top 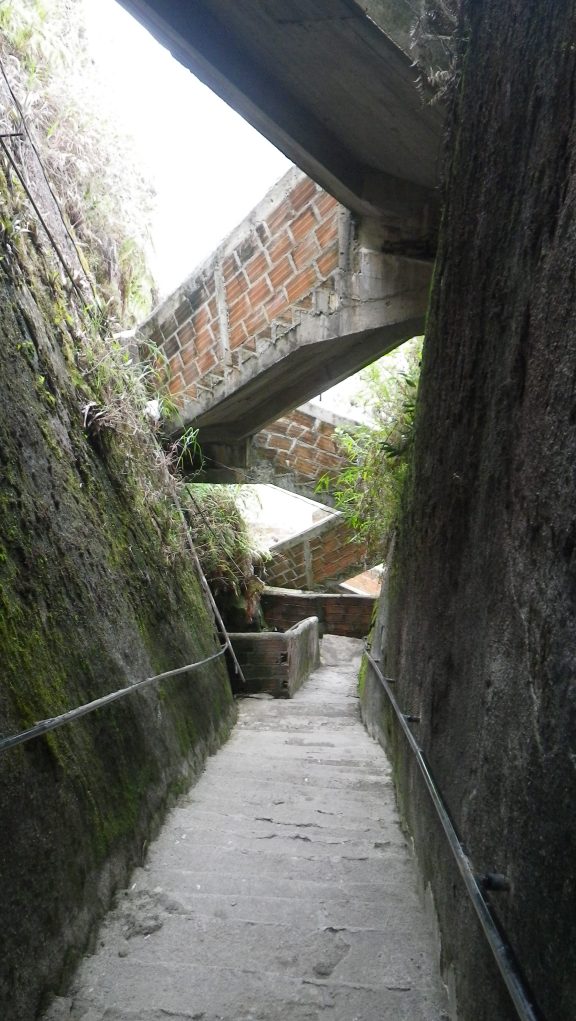 On the way down

Winded and wet I turned the big lass back South and headed for Salento. Situated in the heart of Colombia’s coffee region, the road to Salento smelled of slightly rotten berries as the coffee fruits were being harvested and bagged. It was a beautiful road though aptly named Autopista del Cafe. 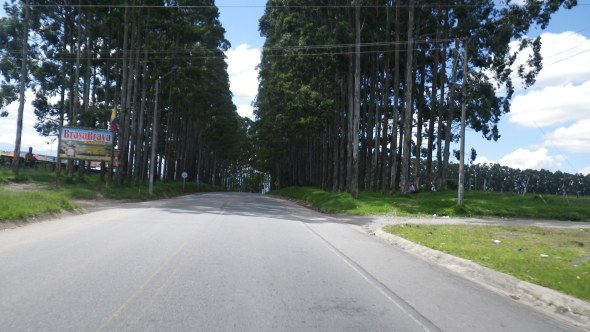 Fresh from the roadside tank

Pressing further on in an effort to reach the equator for New Years, I regrettably spent only one night in Salento but could have easily settled in for a while there. For a trip with no deadlines or known course, it seems a sense of purpose and allure of new destinations keeps me moving probably more than I should. Tengo que frenar más.

From Salento towards Pasto, the Pan American once again greeted me with a road of epic proportions, and for the first time I get the sense of being in the thick of the Andes. 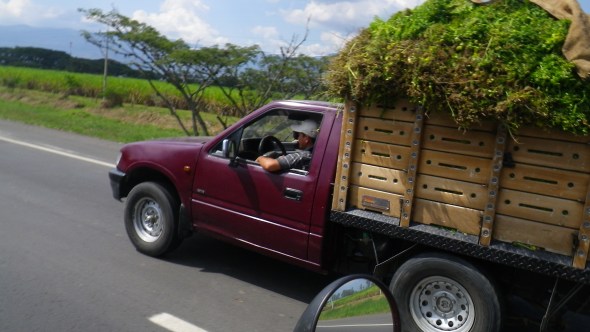 I stayed behind this truck for a while, dude was hauling fresh parsley 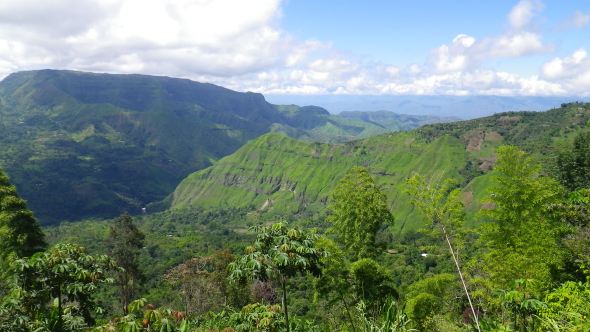 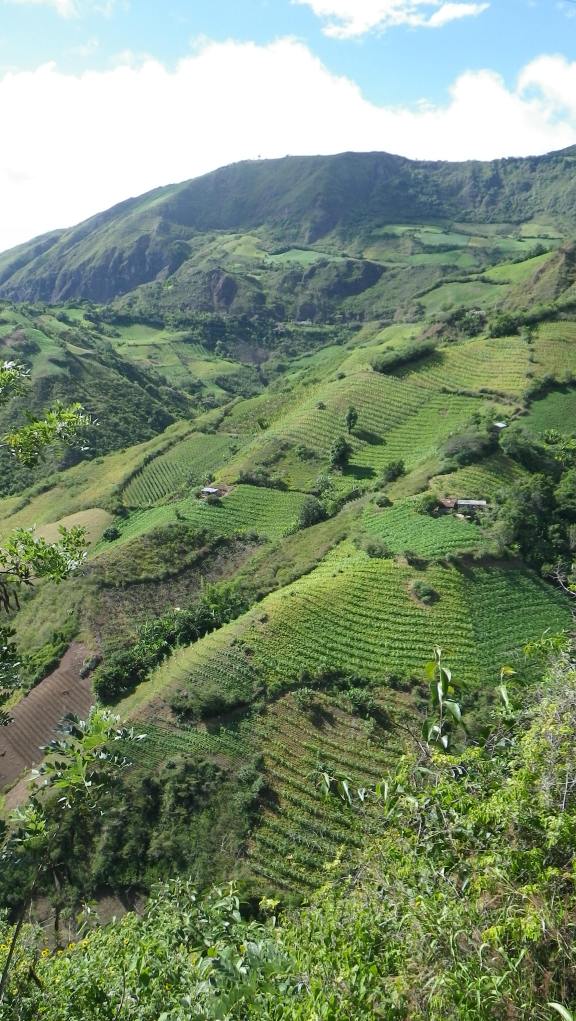 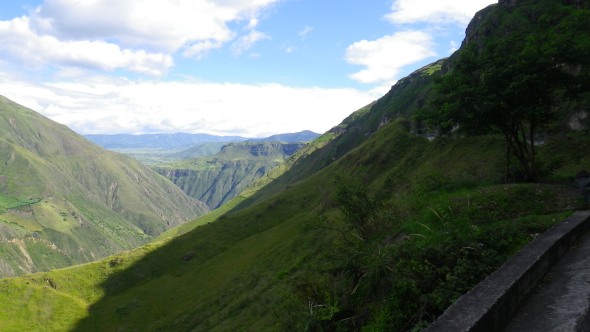 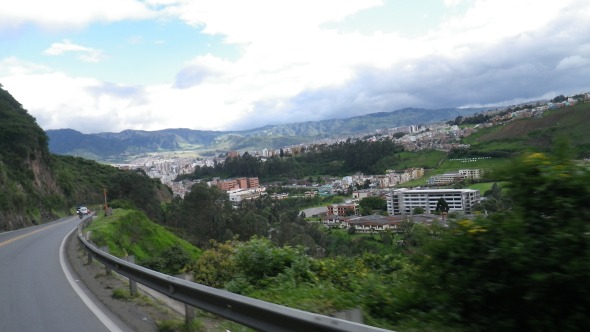 Pasto would be the jumping off point for crossing into Ecuador on the 30th, and with a recommendation from other bikers from the Stahlratte that had passed through already, I found a nice cheap hotel for the night. Once settled, I went about my routine of walking around following my nose to the nearest bakery. I’ll have half a roll stuffed into my face by the time I walk out the front door.

Before crossing into Ecuador the next morning, Colombia had one last farewell sight for me. Las Lejas Sanctuary. Crossing through so many dated European influenced cities already, I find myself barely noticing the cathedrals nowadays. This one being a staggering exception. It seemed to have been placed there straight from Tolkien’s head. 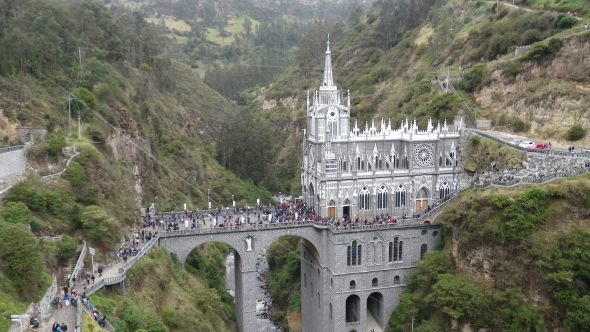 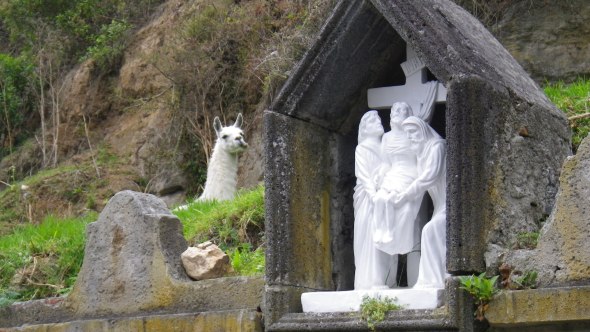 Inside Las Lejas Sanctuary, on a Sunday

The Ecuadorian border was simple, but tedious. Loads of buses were carting people in both directions, so I had to mull about donning full moto gear in hour+ migration lines exiting Colombia and then entering Ecuador. 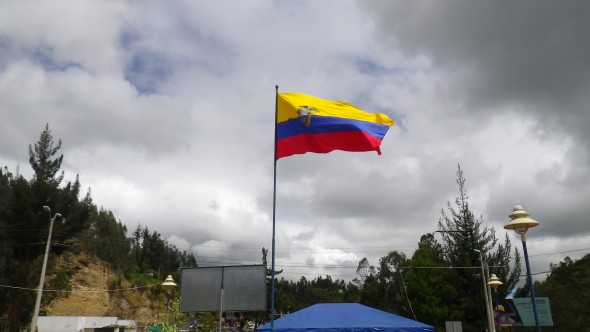 Colombia, Ecuador, and Venezuela all have the same color and layout pattern for their flags. Venezuela has stars, Ecuador has an emblem, and Colombia is straight neat.

The plan was to meet at this converted monastery from the mid 1550’s that is now a boutique hacienda a stone’s throw from the equatorial line. Faster and faster, yipping and smiling like a fool in my helmet I eagerly watched my GPS drop the degrees, then minutes, and finally seconds to 0’s across the board as I rolled into the Southern Hemisphere. I managed to roll my bike out into the plaza to celebrate and snap a few shots.

0’s across the board 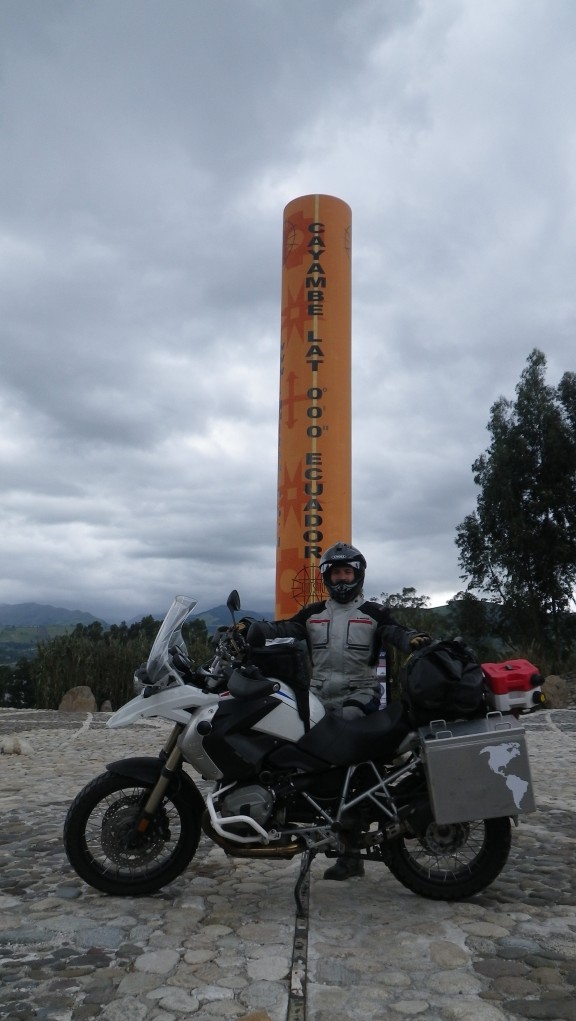 After doing some surprisingly easy (all mental I’m sure) handstands, I rolled into the lower half of the planet in search of the Hacienda and a celebratory cerveza, or fourteen. 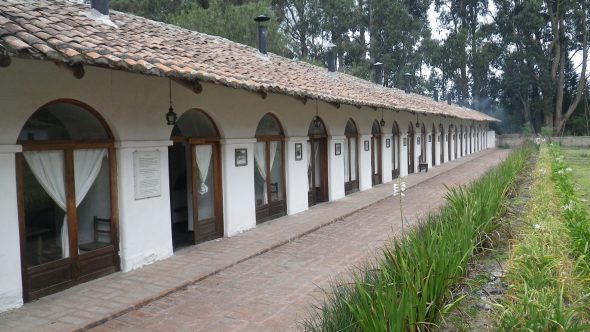 Mine is the room at the end with chimney smoking…

Every room had a fireplace, so I rapidly had it stoked and warming the hearth for a cold night at 9,000+ ft. I arrived relatively early so Franki, Tony, and myself went for an afternoon cruise around the area.

Some back roads near Cayambe, Ecuador

Last years effigies that went into the fire

Shop till you drop? 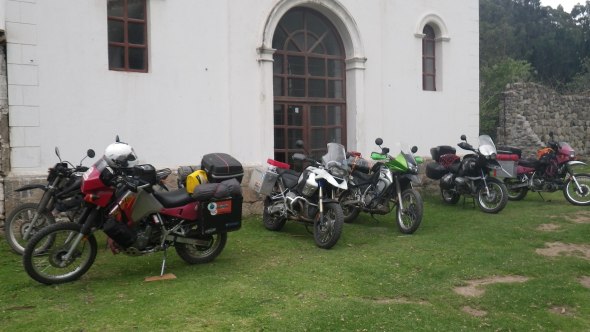 The motley crew at the Hacienda

The Hacineda had some speakers out and repeatedly played “Elmo’s song” for a spell while we all sat around shooting the shit waiting for midnight and the celebratory bonfire in the courtyard.

Easing out of the embrace of a well made bed next to a warm bed of coals, I sluggishly packed up and decided to head for Quito. Everyone left for their own adventure, but pacts were made to meet further down the road. A fair balance of riding with others, and spending time to oneself is clutch if you’re to take some of the places with you.

The street outside the hostel in Quito. Danger.

View from the hostel 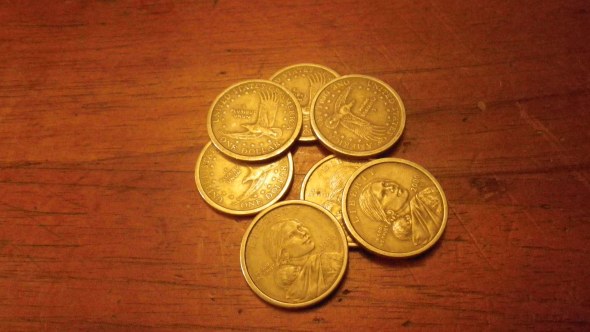 Oh yeah, Ecuador uses the US Dollar as its currency. Ever wonder where all the Sacagawea Dollar coins went? Ecuador.

Gonna spend few days in Quito I reckon, heard about some nice hikes nearby, and I’m hoping to have my valve clearances checked (one of the services I’m hesitant about performing on the side of the road myself) since there is a proper BMW Motorrad dealership here. I haven’t spent a great deal of time researching Ecuador or Peru, so the next few weeks should be interesting. Thanks for tuning in!

“Your true traveler finds boredom rather agreeable than painful. It is the symbol of his liberty-his excessive freedom. He accepts his boredom, when it comes, not merely philosophically, but almost with pleasure.” – Aldous Huxley

Ecuador up to Peru »
« A dip into Venezuela

3 thoughts on “Halfway through the Tropics”